Google is expected to introduce Android 4.3 soon, but if you have a Google Nexus 4 smartphone you can install an early build of the operating system now.

A leaked build of Android 4.3 Jelly Bean for the Samsung Galaxy S4 hit the streets a few weeks ago. Now there’s a build available for Google’s latest Nexus phone as well.

It comes courtesy of Jeff Williams, a guy who bought a used Nexus 4 from a Google employee a few weeks ago, and this week noticed that it was running Android 4.3. 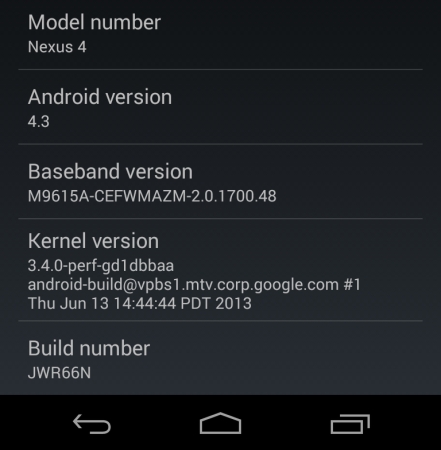 Turning to the internet for help, Williams figured out how to make a backup of his device and upload it to the web.

You can install this build of Android 4.3 on a Nexus smartphone one of two ways. If you have TWRP 2.5 recovery or later, you can simply restore from his backup file. Since he did a system wipe before making the backup, you’ll basically have a factory fresh version of Android 4.3.

There’s also an installable zip file which comes pre-rooted, and which should allow you to update to Android 4.3 without wiping your data. In other words, your apps, Google account, and other information should remain intact. 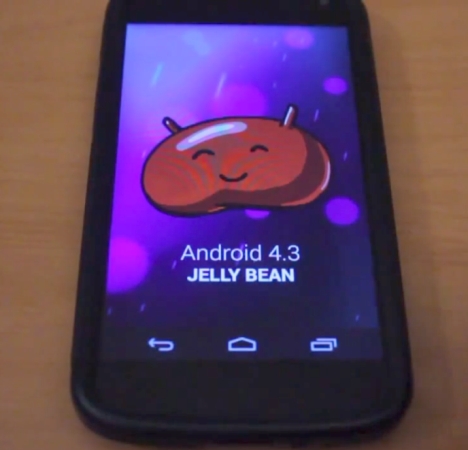 You can find download links for both the flashable zip and the TWRP backup in a reddit thread, or from the xda-developers forum. Android Police has instructions for updating by flashing the zip file.

Keep in mind, this is a leaked, pre-release build of Android 4.3 Jelly Bean. There’s a chance that it could still be buggy, or that some of the features might not yet be complete. So it’s probably a good idea to backup your device before installing it.

Android 4.3 also appears to be a pretty minor software update, although it does include new Bluetooth features, a tweaked camera app, a new font, and a few other changes. This build also seems to have an updated version of the Google Play Store.