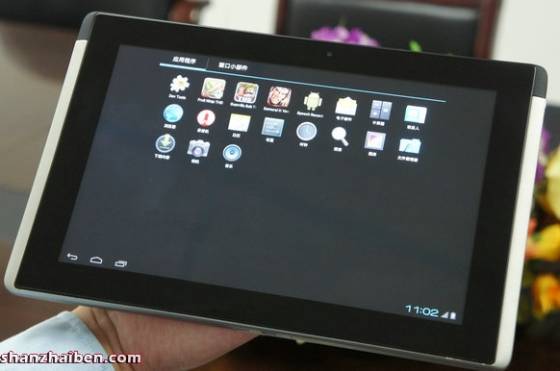 You may not be able to buy a tablet with Android 4.0 Ice Cream Sandwich in North America or Europe yet, but a Chinese company has started showing off Android 4.0 on a 10 inch tablet.

The tablet is one of the first to come with Google’s latest operating system. Over the past year we’ve seen a number of cheap Chinese tablets ship with Android 2.3 or earlier, because Google had never released the source code for Android 3.0 Honeycomb and up. In order to ship a Honeycomb tablet, manufacturers had to work with Google.

Google has released the source code for Android 4.0 though, which means that pretty much any device maker with a little know-how can slap it on a tablet, phone, or other device.

This particular tablet has a 1 GHz NVIDIA Tegra 2 dual core processor, a 10.1 inch, 1280 x 800 pixel capacitive touchscreen display, front and rear cameras, and a 700mAh battery. It supports WiFi, Bluetooth, and GPS, and has HDMI, USB, and SD card slots.

On paper, it looks a lot like virtually every Android 3.x tablet released this summer — the key difference is that it runs Android 4.0.

Chinese chip-maker Rockchip has also said that Ice Cream Sandwich will soon be available for devices with its 1.2 GHz RK2918 processor, which means we could start to see more Android 4.0 tablets from China soon.

via TechCrunch and GizChina

One reply on “Android 4.0 tablet pops up in China”