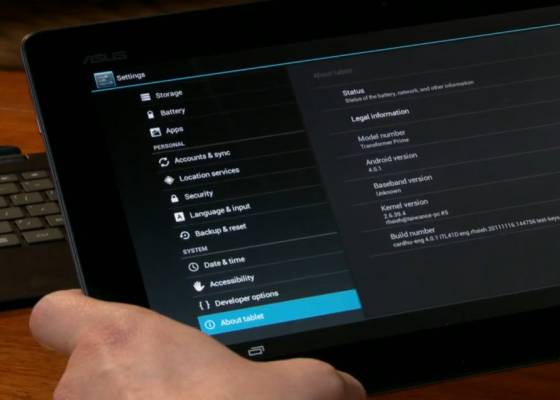 The Asus Eee Pad Transformer will ship with Google Android 3.2 while Asus works on porting Android 4.0 to run on the tablet. But the folks at NVIDIA have already had a chance to check out the new 10 inch tablet with an early build of Android 4.0 Ice Cream Sandwich — and they’ve posted a short video.

The Eee Pad Transformer Prime will be the first device to ship with an NVIDIA Tegra 3 quad-core processor, so the video doesn’t just show off new features in Android 4.0 — it also shows off the 2D and 3D graphics capabilities of the latest Tegra chip. But since google has spent most of its time showcasing Ice Cream Sandwich on phones, it’s nice to see an official build for tablets.

As for unofficial builds, there are a few of those in the works.

In fact, the folks at The Verge spotted a YouTube video showing a first generation Asus Eee Pad Transformer running a custom ROM with Android 4.0.

The software for the Transformer is still rough around the edges. GPS, audio, and automatic screen rotation don’t work, and there are some graphics bugs. But the WiFi and Buetooth do work.

One reply on “Android 4.0 demoed on the Transformer Prime, unofficially ported to original Transformer”