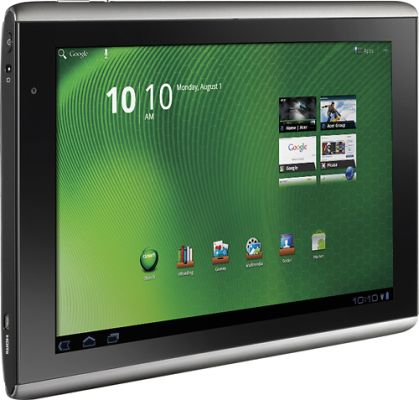 The Acer Iconia Tab A100 7 inch Android tablet may be shipping with the Android 3.2 Honeycomb operating system, but what about Acer’s 10 inch tablet? It looks like those who picked up the Iconia Tab A500 will have to wait a few more weeks. Acer is expected to start pushing out a software update for that tablet starting on August 25th.

Honestly, users probably won’t notice much difference between Android 3.1 and Android 3.2 on a 10 inch tablet. One of the key features in the latest version of Google’s mobile operating system is support for devices with smaller, lower resolution displays such as the A100 tablet. But there is one good reason to look forward to this update: Android 3.2 offers better tablet support for apps that were designed for Android smartphones.

Honeycomb tablets have been shipping since February, but there are still only a few hundred apps designed specifically for Android tablets running Honeycomb. There are hundreds of thousands of apps written for Android smartphones though. While most of those apps can be scaled up to fit on larger displays, some look funny on a 10 inch tablet.

Android 3.2 sidesteps this problem by effectively letting you emulate a lower resolution screen on a Honeycomb tablet so that apps which otherwise wouldn’t fill the full screen now will.

The August 25th date comes form Acer’s Malaysian Facebook page. I have a hard time believing Acer will push out the software update first in Malaysia, so I suspect we’ll see a global rollout on or around that date.