Sure, Android 4.0 Ice Cream Sandwich is all the rage, but if you have a Vizio Tablet and you’ve been stuck with Android 2.3 Gingerbread, you may be happy to know that Android 3.2 Honeycomb is on the way. 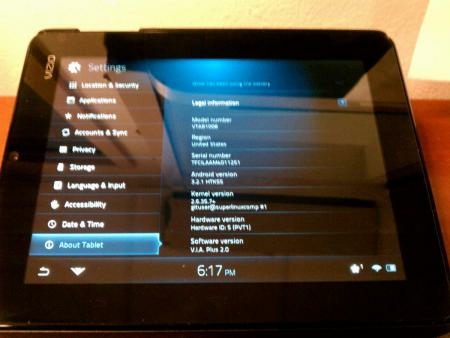 Android Central reports that Vizio is rolling out a major software update which brings a more tablet-friendly version of Google’s operating system to the 8 inch tablet.

Like the company’s original software for the tablet, the new VIA Plus 2.0 software has its own Vizio flavor and doesn’t look like Honeycomb for other devices. But the software now apparently supports third party app launchers if you want to replace the default home screen with ADW Launcher or another app.

Since Android 3.2 features on-screen buttons for home, back, menu, and other functions, the capacitive buttons on the side of the tablet aren’t necessary anymore once you upgrade from Android 2.3. The good news is that means the new on-screen buttons should be available no matter which way you’re holding the tablet.

The Vizio Tablet has an 8 inch, 1024 x 768 pixel display, a 1 GHz processor, WiFi, Bluetooth, and GPS. It features HDMI output and software that lets you use the tablet as a remote control for supported Vizio televisions.

4 replies on “Android 3.2 comes to the Vizio Tablet”