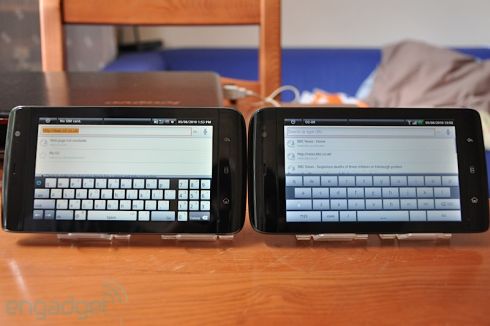 The Dell Streak 5 inch Android tablet isn’t available in the US just yet, but it’s already on the shelves in the UK for anyone who wants a huge phone or a tiny tablet running Google Android 1.6. What, last year’s OS not doing it for you? No problem. Engadget reports that Android 2.1 will be available for the device in early September.

While we were kind of hoping for an Android 2.2 Froyo update, Eclair still has a lot to offer. Aside from support for live wallpapers and newer third party Android apps, Engadget reports that the software update will bring some changes to Dell’s custom user interface for the Streak. Probably one of the most important changes is a vastly improved virtual keyboard.

The first time around, Dell decided to use the extra size of the Dell Streak 5 to cram in a number pad and caps lock key — but 5 inches isn’t really that much room, and Engadget reports that typing is much easier with the new software — although the keyboard still doesn’t support multitouch.

Multitouch is available in some other elements of the Dell Streak though, including Google Maps. The new software also includes the Android 2.1 photo and video gallery app, a redesigned phone dialer, and a new camera app.

You can find more details, photos, and videos at Engadget Mobile.