Following months of developer previews and beta testing, Android 13 has arrived. Google has added the code for the latest version of its mobile operating system to the Android Open Source Project, and the company is rolling out Android 13 updates for supported Pixel phones. Factory images and OTA images are also available.

Among other things, the update brings many small user interface tweaks, additional controls over which apps can send notifications, support for setting default languages on a per-app basis, and the ability to stream messaging apps to a Chromebook. 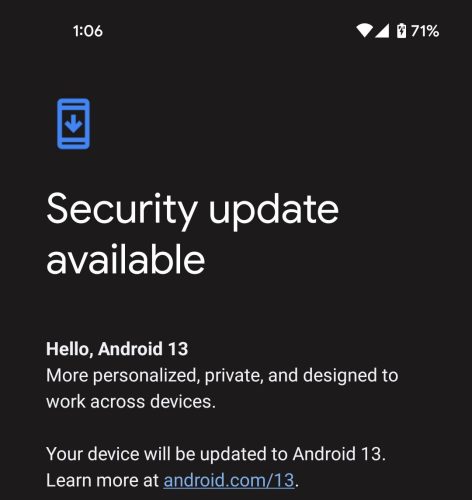 While many of the changes are aimed at developers, allowing them to create apps that take advantage of new (or different) features, Mishaal Rahman has compiled a list of 60 user-facing features inlucded in Android 13. If you’re a more visual-oriented learner, 9to5Google also put together a 23 minute video showing off major new features, which you can see below.

A few highlights include:

You can find more details about Android 13 at android.com/android-13.