Earlier this month Google released the source code for Android 12, but the company didn’t start pushing an Android 12 update to phones… until today.

Now you can install Android 12 on Pixel 3 or later smartphones by opening your system settings and checking for updates, or by waiting until you see a notification letting you know that the software update is available for your phone. Google says Android 12 will begin rolling out to phones from Samsung, OnePlus, and other device makers later this year. 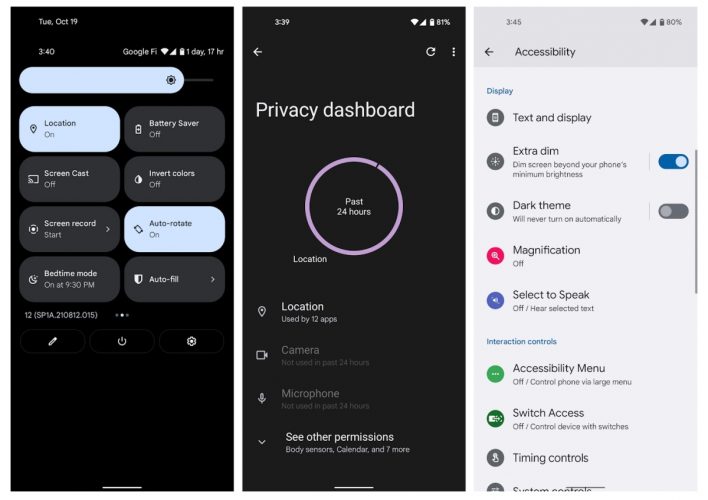 Android 12 brings a number of big changes to Google’s mobile operating system. The most noticeable may be the move to Google’s new “Material You” design, which changes the look of the notifications, quick settings, lock screen, volume and power sliders and toggles, and more.

It’s also highly customizable, allowing you to change the accent colors of your theme using key colors drawn from your phone’s wallpaper. Google notes that the dynamic color features will be Pixel-exclusive at launch, but they should roll out to third-party devices eventually.

Key widgets have also been redesigned, there are new accessibility features including a window magnifier for zooming in on part of the screen and an “extra dim” lighting option for more comfortable viewing at night. You can also flip a switch so that all text is shown in a bold font or switch to grayscale mode.

Another major change is the way Google handles privacy features. You’ll see a notification in the status bar any time an app is using your device’s mic or camera, for example. Or you can block apps from using them using toggles in the Quick Settings. You can also choose whether apps that request your location get precise or approximate location data. And there’s a new privacy dashboard that lets you see which apps have accessed your location, camera, or mic in the past 24 hours, helping you decide which apps to block.

Android 12 will also automatically remove permissions and delete cached files from apps you haven’t used in a while.

Other new features include support for scrolling screenshots, support for sharing WiFi passwords via Nearby Share, and the ability to start playing games while they’re still downloading from the Play Store. You can also quickly change the size of picture-in-picture video windows with a double-tap.

There’s also a Universal Search feature in the app drawer search bar that lets you search for everything on your device including apps, settings, and contacts from one place. And if the thing you’re searching for isn’t on your phone, you can search for it on Google with the tap of a button.

If you have a Pixel 3, 4, or 5 series smartphone and don’t see an update option on your device, you can also download factory images or OTA images from Google to perform a manual update.

Google says Android 12 will also be coming to devices from Samsung, OnePlus, Oppo, Realme, Tecno, Vivo, and Xiaomi “and more” in the coming months.