This week Google is holding a “Hey Google” Smart Home Summit aimed at hardware developers, but open for anyone to check out, since it’s a virtual summit taking place online.

While most of the news out of the summit has involved new features coming to Google Assistant-enabled devices, the folks at Android Police noticed that at one point during the summit, presenters mentioned a launch date for Google’s Android 11 operating system. 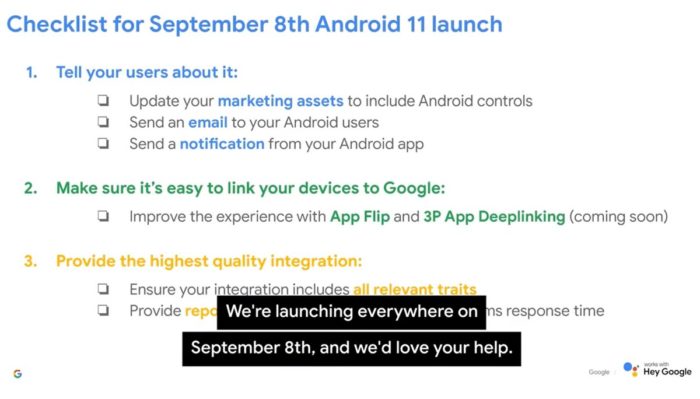 While encouraging developers to make sure they’re ready for the Android 11 launch, Google representatives said “we’re launching everywhere on September 8th,” and in case you’re thinking that might have been a slip of the tongue, a presentation slide titled “Checklist for September 8th Android 11 launch” was displays at the same time.

The date isn’t a big surprise. Google has been saying for months that Android 11 would be released this fall. Now we just have a slightly more narrow time frame.

It’s probably best to treat September 8th as a goal rather than a firm date. We can probably expect at least 1 more beta release before Android 11 goes stable. And if Google encounters any show-stopping bugs during those beta tests, the company could hit the brakes and make sure all the kinks are worked out before Android 11 goes final.

New features in Android 11 are expected to to include a new conversation section in notifications, support for Chat and Messaging bubbles that let you jump back into to a chat from any screen, support for accessing controls for Smart Home devices by long-pressing the power button, and new privacy and security features, among other things.

Update: Google has removed a YouTube video of the presentation which included the slide with the September 8th release date for Android 11.