The Anbernic RG503 is a handheld game console with budget specs and a budget price tag: it has a list price of $150, but it’s on sale for $135 during a launch promotion.

But the Anbernic RG503 has one feature that I wasn’t expecting from a device in that price range: an OLED display. 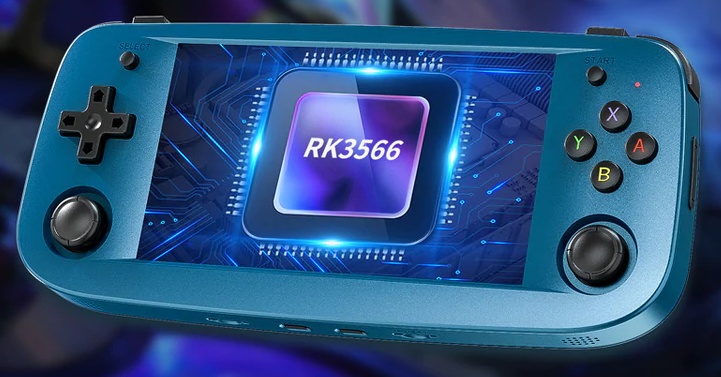 The handheld game console has a 4.95 inch, 960 x 544 pixel OLED display that Anbernic says is the same as the display panel used in the PlayStation Vita, a console which sold for $250 when it launched more than a decade ago (that would be about $320 today when you account for inflation).

But the RG503’s other specs are decidedly less impressive than its display. The device is powered by a Rockchip RK3566 processor, which is a 1.8 GHz quad-core ARM Cortex-A55 processor with Mali-G52 graphics.

It has just 1GB of LPDDR4 memory and just 16GB of onboard storage, although the system has two microSD card slots, each with support for cards with capacities up to 256GB, which means that theoretically you could be able to max out the storage space at 528GB.

It’s also a little unclear at the moment what kind of software the device will ship with. I’ve seen rumors that it supports both Android and the Linux-based emuELEC operating system designed for emulating classic game consoles, and that the RG503 may even dual boot both operating systems. But with just 1GB of RAM and 16GB of storage, it’s unclear that the RG503 has what it takes to offer a decent Android experience in 2022.

Other features include a 3,500 mAh battery that Anbernic says offers up to 6 hours of run time, two USB Type-C ports, a mini HDMI port, a headset jack, and stereo speakers. The handheld supports WiFi 5 and Bluetooth 4.2 and comes in black, blue, or bronze grey color options, all of which are coated in with “metallic” paint finish.

Update: Here’s an in-depth video review from Retro Game Corps, which takes a look at the design, functionality, and game play:

This article was first published on April 20, 2022 and most recently updated April 23, 2022 when Anbernic began taking orders for the RG503.