Amplicity is a new type of computer from startup The Hive which aims to capitalize on a few of the hottest trends on the PC space: tiny computers, modular devices, and software-as-a-service.

Here’s the idea: Amplicity is a pocket-sized PC module. Insert it into a dock and it becomes a full-fledged desktop. You can use the system by paying $99 for every 6 months… and you can upgrade too a newer model, return the system and cancel your subscription, or make other changes when your time is up.

Aside from an opportunity to always have the latest hardware, why would you rent a PC instead of buying one outright? Because it also comes loaded with software. 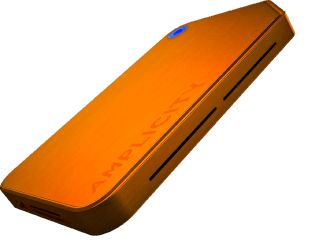 There will be at least two versions of the hardware at launch: Amplicity Anywhere features an Intel Atom processor, 2GB of RAM, and a small solid state drive. This is the version that’ll cost $99 for every half year.

A more powerful version with an Intel Core M processor that’s simply called Amplicity will sell for somewhere around $300 to $400. You’ll be able to buy that model… no subscription fee required.

The little computer modules also have batteries so that your system won’t immediately shut down if you remove it from the dock.

On the one hand, it might be cheaper to just build your own computer, install your desired software on it, and hang onto the system for a few years. On the other hand, The Hive’s Amplicity could be attractive if you want to make sure you always have up-to-date hardware and software.

It’s sort of like Microsoft’s Office 365 for hardware… and software.

The Hive, by the way, was co-founded by John Hui, who is also behind Fuhu (maker of the Nabi line of tablets for kids) and eMachines.

Amplicity Anywhere should launch this Spring, with the more powerful Amplicity launching later in 2015.

via PC World, CNET, and Gizmodo

8 replies on “Amplicity is a modular, rentable PC loaded with software”