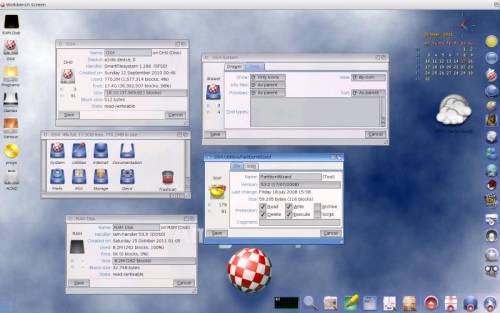 Once upon a time before Windows, Mac, and Linux operating systems ruled the world, there was a moderately popular alternative called AmigaOS. It was originally designed for Amiga computers sold by Commodore starting in the 1980s, and the computers earned a reputation for offering high quality graphics and advanced multitasking capabilities… at least as judged by the standards of the day.

AmigaOS has largely faded into obscurity, but an active user community kept the dream alive… and a company called Hyperion Entertainment even produced AmigaOS 4 for computers with PowerPC processors less than a decade ago.

This weekend AmigaKit and A-Eon Technology launched a new desktop computer designed to run AmigaOS 4.1 called the AmigaOne X1000. It has a 1.8 GHz dual core processor, ATI Radeon R700 graphics, 2GB of memory and a 500GB hard drive. If it weren’t for the nostalgic operating system it’d be easy to mistake the AmigaOne X1000 for a typical desktop computer running Windows or OS X.

But Hyperion’s Steven Solie and Hans-Joerg Frieden have also confirmed that a new AmigaOS powered netbook is in the works. It’s expected to run AmigaOS 4, have a PowerPC processor, and cost between $300 and $500.

The laptop is currently in testing, but prototypes have 512MB of RAM, a small amount of flash storage, integrated graphics, 2 USB ports, WiFi, and Ethernet. Those details are all subject to change though. The netbook is expected to launch by the middle of 2012.

One reply on “AmigaOS netbook in the works”