THEA500 Mini is a game system aimed at nostalgic computer users looking for a taste of the ’80s. Designed to look like the Amiga 500 computer, THEA500 Mini comes with 25 classic Amiga games pre-installed. User can also load and play their own games with a USB flash drive.

First announced last summer, THEA500 is now available in the UK, where it’s sold by GAME, Smyths Toys, and Amazon. It’s also up for pre-order for $140 in the US, where it’s expected to be released May 31, 2022. 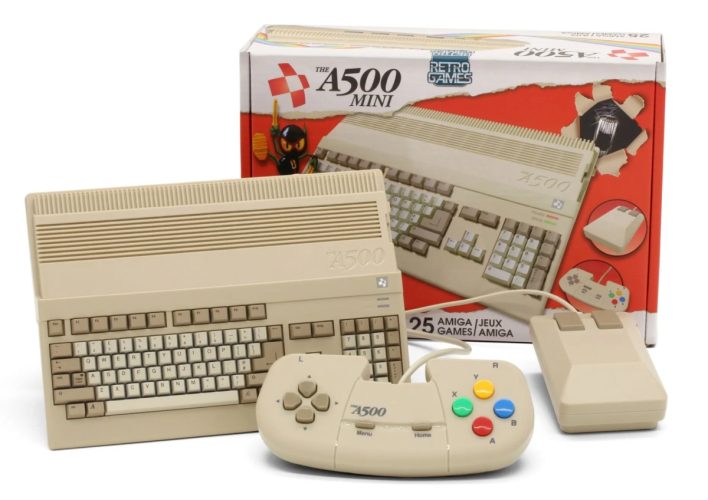 The system comes with an Amiga-style mouse, a game controller, and a few modern accessories including an HDMI cable and USB-C power cable (although you’ll need to bring your own AC adapter, since there isn’t one in the box). The system can output 720p video to a TV or monitor at 50 or 60 Hz. There’s also an optional CRT filter that gives games a more authentic look even when you’re playing on modern screen.

One of the strange things about the device is that the keyboard is just for show – you can’t actually type on it. The keys don’t even move. Instead, they just help fill out the illusion that you’re using a computer from 1987 instead of a retro game console from 2022.

THEA500 is powered by an Allwinner H6 quad-core ARM Cortex-A53 processor, an unspecified amount of RAM, and 256MB of built-in storage for the operating system and pre-installed games.

Early reviews of THEA500 Mini are mostly positive, although the game controller is apparently uncomfortable and possibly unnecessary – many Amiga games don’t actually use very many buttons. There is an optional THEJOYSTICK controller for folks craving a more 1980s-like experience.

But reviewers generally like the quick setup and ease of use. And official support for loading your own games helps set THEA500 Mini apart from many other retro consoles, which often need to be hacked if you want that sort of functionality.