In other words, Project Quantum should be able to handle 4K video at 60 frames per second, DirectX 12, OpenGL 4.5, Mantle, and pretty much everything else you need for gaming, virtual reality, and ultra high-def video. 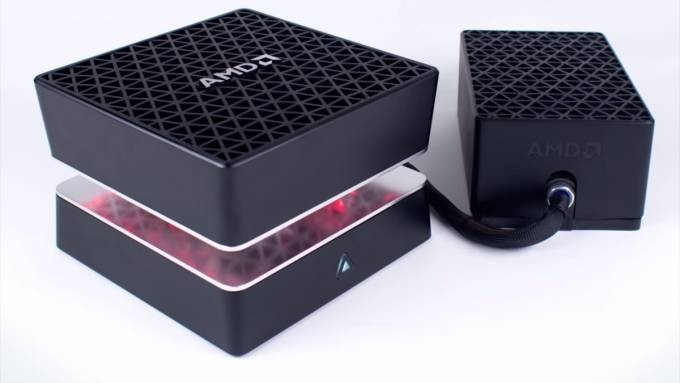 In some ways, Project Quantum feels like AMD’s answer to Intel’s NUC line of mini-computers. But while both chip makers have developed a platform for tiny desktop computers, AMD is focusing first and foremost on graphics… an area where the company still ahead of Intel.

Project Quantum may be small, but it uses high-power chips that can generate a lot of heat, so there’s a heavy emphasis on cooling solutions. The system has two components: the bottom features the motherboard, graphics card, and all the other hardware, as well as a liquid cooling solution. But the top half of the computer has an air cooling system, Water is pumped to the top to cool off and then pumped back down to the bottom to keep the Project Quantum PC from overheating.

The case itself can house a standard mini-ITX motherboard which means you can use Intel or AMD processors. In fact, the company is showing off a demo of a system with an Intel Core i7 chip and a Radeon R9 Fury X graphics card at the E3 game show this week. Eventually it could ship with an upcoming AMD processor when the little computer ships later this year.

AMD’s computer probably won’t be cheap though: the graphics card alone has a list price of $649.