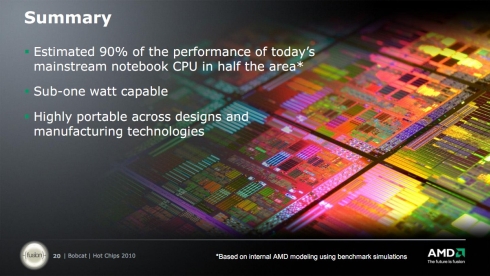 AMD isn’t expected to ship chips based on its new Ontario platform until later this year, and you likely won’t be able to buy laptops with the processors until early 2011. But the folks at InsideHW got a chance to check out an Ontario test platform at the IFA show in Berlin this week.

Ontario is the next-generation low power platform that AMD is developing for netbooks and other thin and light notebooks. Like most other AMD chipsets, the Ontario chip had no problem handling 1080p HD video playback. It can also handle DirectX 11.

AMD says several major PC makers are already testing Ontario, which means we could see new systems based around the chip very early next year — perhaps in time for CES in January?

Of course, while we’re waiting for Bobcat, there are plenty of mini-laptops based on AMD’s Nile platform available for purchase, including the Acer Aspire 521 and 721 and the Dell Inspiron M101z which I reviewed recently. I’ve been pretty impressed with the overall performance and battery life of these units.