AMD officials confirmed that devices with Beema chips are on the way during the chip-makers quarterly earnings call. 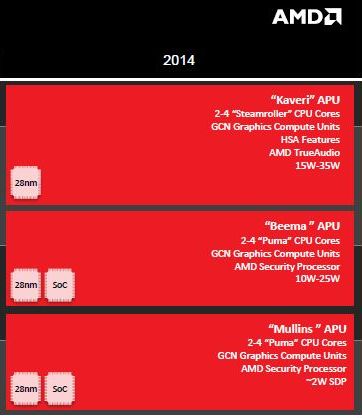 According to CPU-World, the upcoming Beema chips will come in dual and quad-core varieties and feature integrated security and more efficient performance than the AMD Kabini chips they’ll gradually replace.

The new processors are 28nm chips that will be available with 10W through 25W TDPs, and which will feature AMD Radeon graphics.

Pricing hasn’t been announced, but it’s likely we’ll continue to see AMD position its ULV chips as alternatives to Intel Celeron, Pentium, and Core i3 chips which means we could see the new processors in entry-level and mid-range Windows notebooks and tablets.

13 replies on “AMD’s low-power Beema chips for notebooks, tablets on the way”