Chip maker AMD is starting to provide details about its first ARM-based processors, and while the new chip are more efficient than a typical x86 processor, they’re kind of low-power powerhouses. 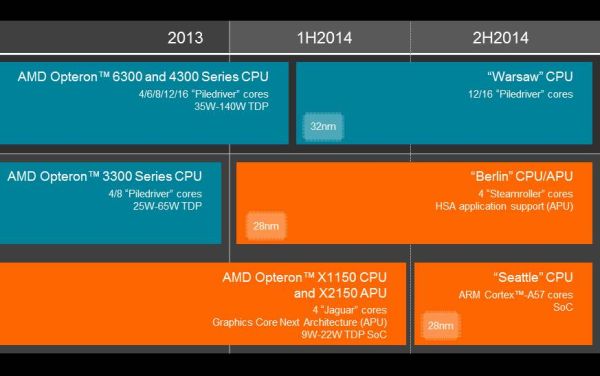 AMD Seattle chips will be 64-bit processors that come in 8-core, and 16-core versions, and which will run at clock speeds of 2 GHz or higher. The chips support up to 128GB of RAM.

According to AMD, the new chips will offer more performance-per-watt than the company’s Opteron X-series chips for servers.

On the other hand, a 16-core Cortex-A57 processor will likely be way too power-hungry to find its way into a smartphone or tablet anytime soon. They make more sense for server racks, where energy efficiency is important, but battery life isn’t really a factor.

But now that AMD is taking its first steps into ARM-based chip designs, it may not be long before we see the company adopt ARM architecture for future low-power chips aimed at mobile devices. The company has already hinted at that possibility. For now, the company is positioning its x86-based Temash and Kabini chips for notebook and tablets.