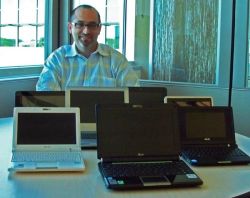 AMD Vice President of marketing Pat Moorhead has been testing out a number of netbooks for the last 6 months or so. And while he’s said the reason AMD hasn’t come out with a netbook processor yet is because the market is still young and netbooks aren’t living up to their promise, it’s looked a lot like he’s just been busy making excuses. But Moorhead says that’s not it: it’s just that he’s been less than impressed with every netbook to date.

Moorhead wrote an op-ed for Notebooks.com this week that outlines his ideal netbook. Or rather netbooks. He says he has different needs for a mini-laptop he would at home and for one that he would use away from the house.

I’m going to completely disregard his ideal at-home netbook because it’s not a netbook. He wants a 13 inch screen and says that weight doesn’t matter that much. In other words, even after testing 7 different netbooks, Moorhead still doesn’t seem to understand what a netbook is and he should just by an old school laptop.

He does raise some interesting ideas for an away-from the house netbook. He wants a machine with a 1024 x 768 pixel or higher resolution display, and a 10 inch screen. Oh yeah, and it should be 3/4ths of an inch thick or thinner and weigh 1.5 to 2 pounds. He also wants a 320GB hard drive, the ability to connect to 3G networks using any SIM card, and built in GPS and Bluetooth.

And yeah, all of those things would be nice. But somehow I think a 2 pound netbook that measures 3/4ths of an inch thick is going to cost a bit more than your typical netbook – which kind of makes it not a netbook. The Asus Eee PC S101 already pushes the definition right up to its breaking point with its 2.4 pound weight, 1 inch height, and $699 price tag. Maybe in another year or two someone will be able to sell a smaller, lighter machine for $299. But I’d be surprised if you could find one today for less than $1500.

8 replies on “AMD VP: My ideal netbook doesn’t exist yet”