AMD is showing off a reference design for a Windows 8 tablet with a detachable keyboard dock. The computer features an 11.6 inch, 1366 x 768 pixel display and an AMD Trinity processor. 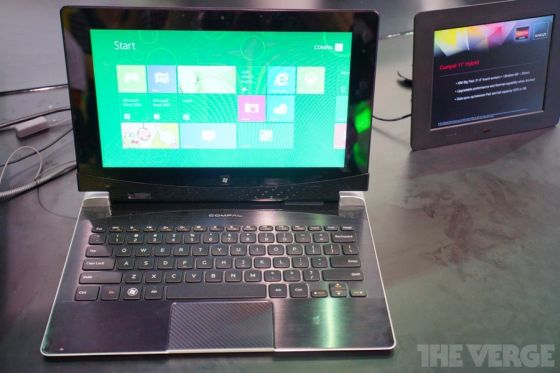 The prototype looks a lot like other hybrid tablets we’ve seen this week, but most of those featured Intel or ARM-based processors. AMD is looking to show that it compete on a level playing field by offering processors that offer beefy performance but also use energy wisely, allowing for long battery life without a monstrous battery pack.

AMD’s design also features a kick-stand, which lets you prop up the tablet on a table without connecting it to a dock or other accessory. This could come in handy if you plan to spend a lot of time watching videos or playing games on the tablet — and one of the areas where AMD has traditionally excelled is in graphics performance.

This isn’t a real tablet expected to ship anytime soon, but it’s a reference design that could give us an idea of what future devices with AMD Trinity processors could look like.