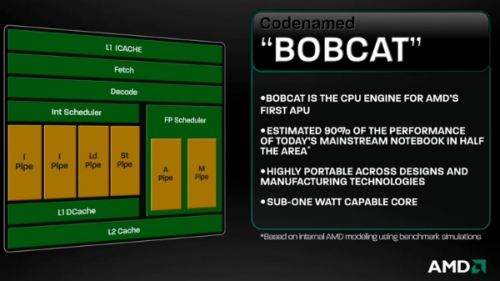 AMD has been teasing us with information about its upcoming Bobcat core for low power chips for ages… and is continuing to taunt us because the company doesn’t plan to actually launch chips based on the core until next year. Still, I guess we’ll have to take what we can get for now… and what we’ve got today are a few slides detailing the goals for the Bobcat core which will power the upcoming AMD Ontario chips for low power notebooks and possibly tablets, MIDs, or other devices.

The Bobcat core is capable of running on less than one watt of power. AMD says it offers about 90% of the performance of today’s chips, while taking up less than half the silicon area — which leads to lower power consumption and reduced heat generation. like Intel’s Atom chips, the Bobcat core is a 64-bit chip. Update: Intel’s latest Atom chips including the Atom N450 and Atom N550 are 64-bit, but usually ship with the 32-bit version of Windows 7 Starter Edition thanks to Microsoft restrictions.

The Ontario platform will pair the Bobcat CPU core with an AMD graphics processor on the same chip, making it the first system-on-a-chip from AMD.

You can find out more about Bobcat, as well as the upcoming high performance Bulldozer CPU core in the video after the break.