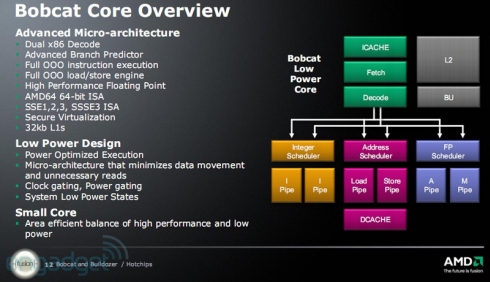 AMD is starting to make a name for itself with low power, moderate performance chips that are showing up in netbooks and ultraportable notebooks including the Acer Aspire One 521 and Dell Inspiron M101z. But the company’s not done pumping out chips for the budget ultraportable market. In fact, AMD is just getting started.

Today AMD unveiled new details about its upcoming Bobcat platform for small, low power devices such as netbooks, nettops, and tablets. Bobcat is the processor core that will show up in the Ontario chips due out in early 2011.

AMD says Bobcat is capable of operating on less than a watt of energy, but it’s an x86 processor with out0of-order execution, which means it should be more than capable of powering Windows and other complex operating systems. According to AMD, the Bobcat core offers 90% of the power you expect from a mainstream chip today, while using less than half the silicon area.

Ontario chips will combine the Bobcat CPU with a graphics processor and high speed bus to offer a complete chipset. Of course, we won’t really know how the Ontario chipset compares with existing technology such as Intel’s Atom or ULV platforms or the AMD Neo chips available today until the new chips are released early next year. And by that time, Intel will likely have launched its next-generation Oak Trail platform for mobile devices. The march of progress never stops.