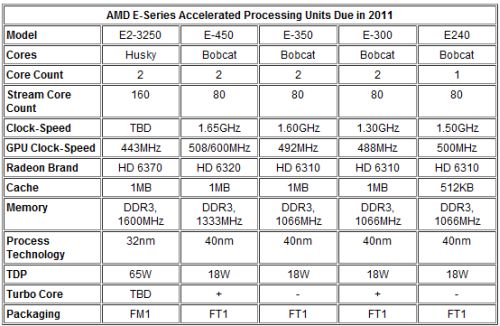 AMD’s Fusion platform combines graphics and CPU functions onto a single chip to provide a fair amount of power while conserving energy. The first Fusion chips to hit the streets have been C-series and E-series low power processors for netbooks and notebooks such as the Acer Aspire One 522 and HP Pavilion dm1z. But according to DigiTimes, AMD is set to launch a series of new Fusion processors this summer aimed at desktop and laptop computers.

Among the new chips will be the AMD E-300, E-450 Zacate processors for notebooks.

This will give AMD a total of 6 E-series chips. Most of these chips will be destined for laptop computers, but according to information obtained by Xbit Labs, the top of the line E2-3250 chip will have a TDP of 65W, making it a better candidate for desktop applications. The AMD E-240, E300, E-350, and E450 all use just 18W.

The company is also expected to introduce a new line of 32nm Llano processors for desktop computers.

5 replies on “AMD to launch new Fusion chips for notebooks, desktops in Q3”