AMD has been a bit player, at best, in the tablet space up until now. But this year the company plans to  launch new low power chips designed for tablets and ultrathin laptops.

AMD’s new Kabini chip is the successor to the AMD Brazos line, and will offer a 50 percent performance boost for notebooks over current chips like the AMD E2-1800.

Both Kabini and Temash processors are due out in the first half of 2013. 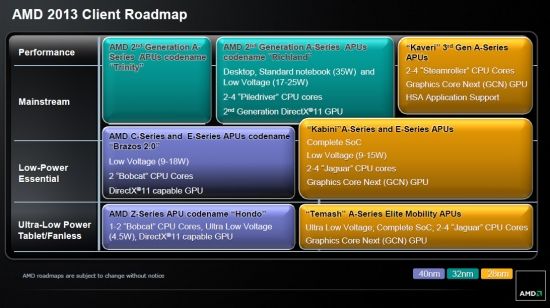 AMD says Temash and Kabini will be the first quad-core x86 system-on-a-chip processors to hit the streets — although that probably depends on whether AMD ships its chips before Intel can bring its Atom Bay Trail processors to market later this year.

We’ve been hearing about the new Temash and Kabini chips for almost a year at this point, so it’s good to hear that they should finally be ready to ship… sometime within the next 6 months.

4 replies on “AMD Temash, Kabini low power chips coming in the first half of 2013”