AMD’s first Threadripper processor went on sale earlier this month, and now the chip maker is rounding out the lineup with its most affordable Threadripper chip… while making the case that it’s still a pretty big upgrade over the Ryzen 7 1800X processor that launched earlier this year. 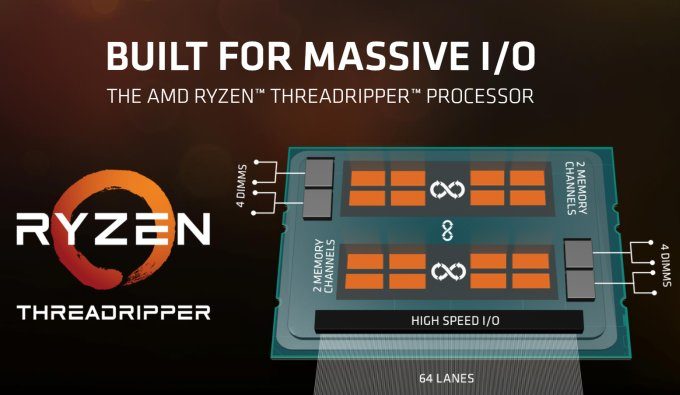 Both the Ryzen 7 1800X and the new Ryzen Threadripper 1900X are 8-core/16-thread processors. But the Threadripper model has higher clock speeds and support for more memory, more PCIe lanes, and more I/O ports, among other things.

Amd’s Threadripper 1900X has a base clock speed of 3.8 GHz and support for 4 GHz boost and 4.2 GHz XFR speeds. The chip is also unlocked, which means you can attempt to overclock it.

It supports quad-channel memory with up to 8 DIMMS and up to 2TB of RAM. And it has 64 PCI Express lanes.

AMD says the two chips offer similar performance for gaming. So if that’s all you want, you might be better off with the Ryzen 7 chip. It has a list price of $500, but some retailers are already selling the octa-core desktop processor at significant discounts.

But the the additional PCIe, I/O, and memory support gives the Threadripper 1900X an edge in other tasks. And it also has one more new feature that AMD is adding to its Threadripper chips: support for NVMe RAID storage configurations.

AMD says it will release a new NVMe RAID driver for the x399 platform on September 25th, bringing support for bootable RAID modes 0,1, and 10 for up to 10 devices.