A little over a year after launching its first Ryzen Embedded processors, chip maker AMD is expanding the family. The new Ryzen Embedded R1000 chips are based on the same Zen architecture as last year’s V1000 series processors. But the company says they offer more bang for the buck for device makers looking for a low-power, high-performance solution.

The first boards featuring Ryzen Embedded R1000 chips are set to ship by June, with devices from OEMs powered by the new chips coming this fall. 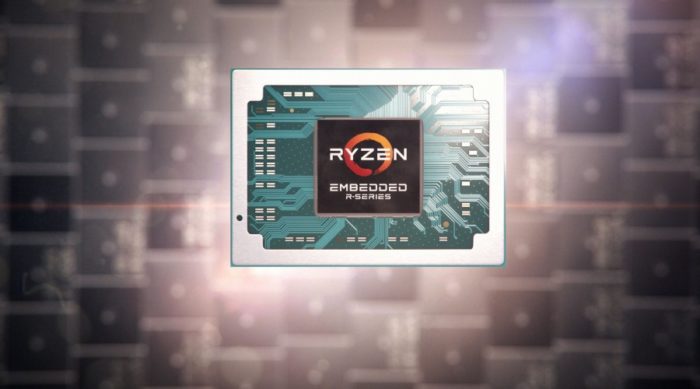 Ryzen Embedded chips are largely designed for industrial and enterprise systems including thin clients, medical gear, casino game systems, and the like. But we’ve seen a handful of products aimed at the consumer/prosumer/maker space including the Udoo Bolt single-board PC and the upcoming Smach Z handheld gaming PC, both of which use V1000 series chips.

So what kind of devices can we expect to use AMD’s new cheaper, lower-performance R1000 series chips? Well one device that’s already been announced is the Atari VCS retro game console/PC.

Atari revealed last month that it would be using an unnamed AMD Ryzen chip. Now we know it’ll be a Ryzen R1000 processor.

Other companies planning to release R1000 hardware include ASRock, Advantech, SCALA, zSpace, Axiomtec, and Quixant, just to name a few.

Both chips are 14nm processors with support for a 12 watt to 25 watt TDP and both are dual-core, quad-thread chips with 1MB of L2 cache, 4MB of L3 cache, support for DDR4-2400 RAM, and support for dual 10Gb Ethernet jacks. 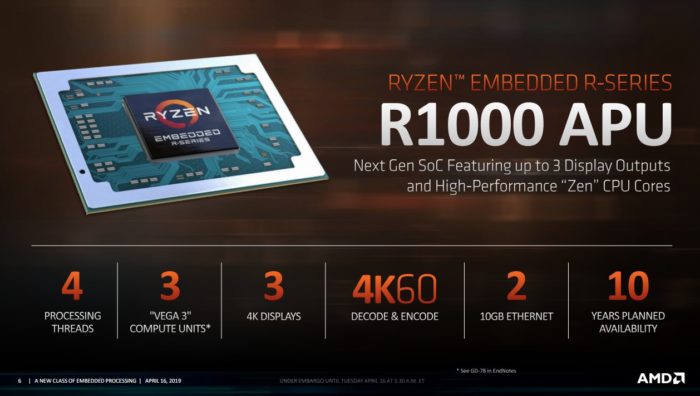 Now that AMD is starting to ship 12nm laptop chips based on the company’s newer Zen+ architecture, it strikes me a bit odd to see the company expanding its embedded chip lineup with a processor that uses last year’s architecture and offers less performance than last year’s chips.

But AMD says it’s looking to expand its produce lineup by offering a new lower-cost, lower-performance solution that’s pin compatible with its existing embedded chips. We will likely see next-gen Ryzen Embedded chips based on newer architecture next year.

For now, the company says its expanded line of embedded chips offer advantages over Ryzen Mobile laptop chips for developers of certain devices including a longer support lifecycle (AMD will offer 10 years of availability and support for these chips), broader Linux support, and enhanced security features.