AMD expects to begin shipping Ryzen 7000 processors for desktop computers this fall, but after a brief teaser in January, now the company is giving us a better idea of what to expect: faster performance, better integrated graphics, and baked-in support for DDR5 memory and PCIe 5.0.

You’ll need a new motherboard to use the chips though: AMD says Ryzen 7000 desktop processors use a new 1718 pin LGA socket and AM5 motherboard. The new chips aren’t compatible with AM4 motherboards. 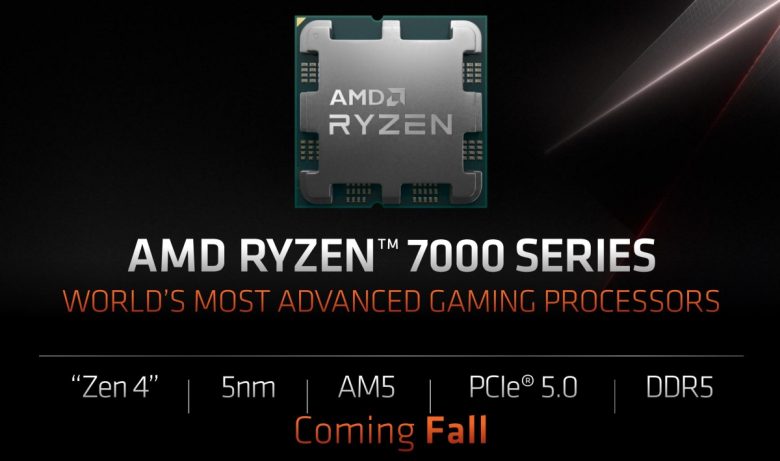 The good news is that the new boards should include native support for dual-channel DDR5 memory and up to 24 PCIe 5.0 lanes. They’ll also be able to provide 170 watts of power to the processors, up from 105 watts for Ryzen 5000 chips with AM4 motherboards. AM5 boards also support peak power up to 230W.

AMD’s new Ryzen 7000 chips are composed of several chiplets. The CPU cores are based on AMD’s Zen 4 architecture, and the company says these 5nm CPU cores will bring:

But the CPU is just part of the chip. There’s also a new 6nm I/O die that includes integrated graphics based on AMD’s RDNA 2 architecture, memory and PCIe controllers, and support for up to 4 displays.

While AMD still hasn’t told us exactly when Ryzen 7000 desktop processors will hit the streets or provided detailed specs for specific processors, the company has confirmed that we can expect chips with up to 16 CPU cores and 32 threads.

And while the new AM5 motherboards can provide more power to the processor, the new chips also include efficiency improvements thanks to TSMC’s 5nm and 6nm manufacturing processes, which could bring lower power consumption when the chips aren’t running at full speed.

press release and announcement (YouTube), more analysis at AnandTech and The Verge