AMD announced in January that its 2nd-gen Ryzen chips for desktops were set to launch in April. But thanks to leaked slides posted to El Chapuzas Informático, we already have a pretty good idea of what to expect from the upcoming AMD Ryzen 2000 series of desktop processors. 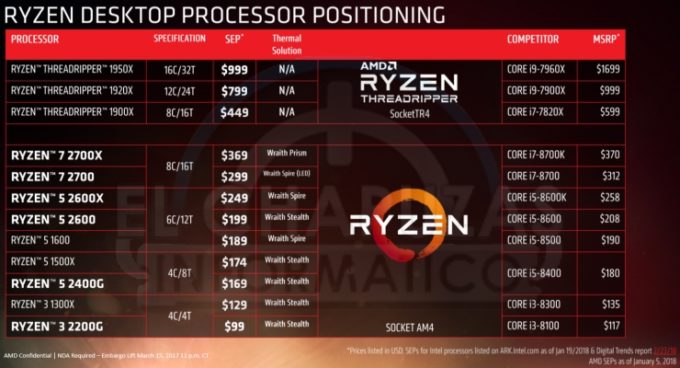 AMD already introduced the Ryzen 3 2200G and Ryzen 5 2400G earlier this year. Those are the company’s first Ryzen desktop processors to feature integrated Radeon Vega graphics. But here’s what we can expect from the rest of the Ryzen 2000 family:

For the most part the new 2000 series processors are all based on AMD’s new 12nm Zen+ CPU architecture (except for the G-series chips with Radeon graphics, which are 14nm Zen chips).

They also tend to have higher turbo speeds than their predecessors.

The new 12nm chips feature an updated chipset and they’re compatible with both a new line of 400 series motherboards and with last year’s 300 series boards (while 1st-gen Ryzen chips only work with 300 series motherboards. The new boards offer “precision boost overdrive” to support the higher boost speeds available from processors with X at the end of their names.

The first of those new motherboard designs will be the X470, with a B450 design following later this year. Both should bring support for optimized memory routing, lower idle power, and the ability to disable USB ports on a per-port basis, among other things.

It’s unclear if leaked slides paint a picture of AMD’s complete 2nd-gen Ryzen lineup, or just tells us about the first four chips we can expect. There’s no Ryzen 7 2800X chip to replace last year’s Ryzen 7 1800X, for example. But the company says you can expect better gaming performance from a 2018 Ryzen 7 2700X than from a 2017 Ryzen 7 1800X, so the omission isn’t all that disappointing.