AMD has painted a basic picture of its plans for the next two years and it probably shouldn’t surprise anyone that a big part of that picture focuses on low power processors. 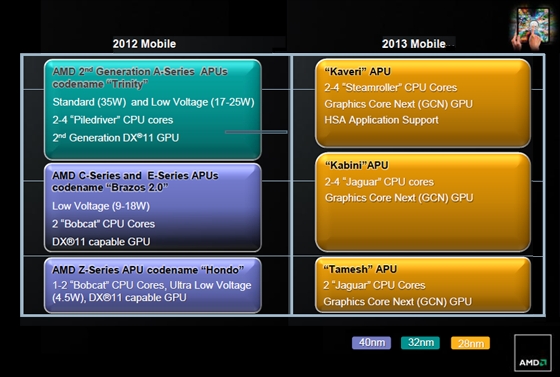 The chip maker plans to update its E-series and C-series notebook chips later this year, as well as its Z-series low power chip for tablets.

The next-generation laptop processors will be codenamed Brazos 2.0 and they’ll be low voltage chips for thin and light laptops which use 9 to 18 watts of power — much like the Brazos 1.0 chips that are already available. The new models will have a couple of extra features though, such as support AMD’s TurboCore technology.

AMD’s new Z-series processor for tablets and other low-power devices is codenamed Hondo. It will have a TDP of 4.5 Watts and be available with 1-2 processor cores. All of these chips will be able to handle DirectX 11 graphics and HD video playback.

Next year AMD will launch a series of 28nm chips, with the 3W “Tamesh” processor line replacing Hondo, and “Kabini” replacing Brazos 2.0.

While Brazos and Brazos 2.0 processors are all dual-core chips, next year’s Kabini chips will be low power processors which come in dual or quad-core versions.