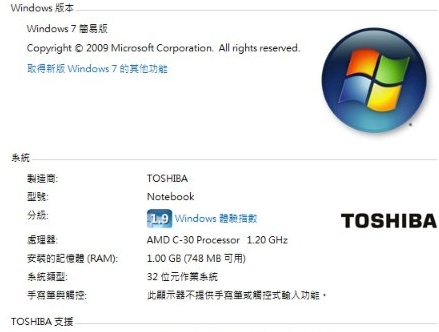 The folks at ePrice have posted some of the first benchmarks of AMD’s new C-30 low power chip. This is a 1.2GHz single core processor with AMD Radeon HD graphics. Honestly, I don’t expect to see many computers ship with the C-30, since AMD is really pushing the C-50 dual core version as more of a direct competitor to Intel’s Atom processor, but the test results are still pretty interesting.

Here’s the short version of the test: In terms of CPU performance, the C-30 doesn’t come close to Intel’s dual core Atom N550 processor. But the C-30’s Radeon graphics performance blows away the integrated GMA 3150 graphics you get with a standard Atom N550-based computer.

As for the slightly longer version, ePrice compared two Toshiba netbooks. One had an AMD C-30 CPU while the other had an Atom N550 chip. The C-30 got a lousy 1.9 score on the Windows Experience Index, while the Atom N550 got a 3.1. But while the Atom chip scored a lousy 152 points on the 3DMark06 graphics benchmark, the AMD-based system notched a score of 1710.

Hard drive, memory, and other hardware may have played a role in these tests, but since both test machines were Toshiba netbooks it seems likely that the biggest difference was the chipset.

Again, these tests tell us little to nothing about the performance of AMD’s new C-50 dual core chip, and the fight doesn’t seem entirely fair since a single core chip was pitted against a dual core chip with support for hyperthreading. But it does provide a first look at some of the pros and cons of AMD’s new 9W Ontario platform. The 18W Zacate platform appears to be a completely different story.