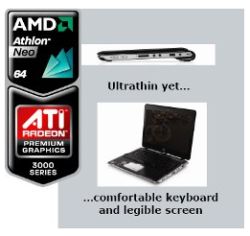 The AMD Neo chip is sort of, kind of, AMD’s answer to the Intel Atom CPU that has become so popular in netbooks. AMD isn’t really going after the cheap ultraportable market that Intel has virtually conquered. But the Neo is designed for larger, pricier machines that offer better graphics performance while still costing a lot less than a sub-4 pound notebook would have cost a few years ago.

The problem is that when it comes to everything other than graphics, the Neo doesn’t really outperform the Intel Atom CPU by a wide margin. In recent tests and reviews, the HP Pavilion dv2 (the first computer using a Neo CPU), scored well on graphics benchmarks, but was sluggish on other tests and got lackluster battery life.

But AMD may have an answer for some of those problems… in the form of a dual core Neo processor. AMD is expected to ship a dual core Athlon Neo for thin and light laptops by the end of the quarter, which means we could see them show up in computers as early as this summer. The original single core Neo chip doesn’t handle multitasking all that well when compared with Intel Atom N270/N280 processors that support hyperthreading. A dual core CPU will probably fare much better.