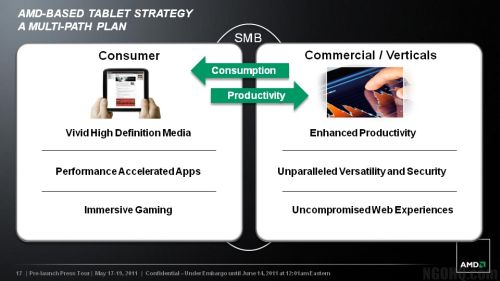 AMD has officially unveiled a new low power chip called the AMD Z-01. This is the same “Desna” chip that we first heard about in a leaked product roadmap a few days ago, and it’s AMD’s solution for tablets and other low power mobile devices.

The AMD Z-01 features a 1 GHz dual core CPU and Radeon HD 6250 graphics with support for hardware accelerated 3D graphics and 1080p HD video playback. The chip has a TDP of 5.9 Watts, which makes it even more efficient than the 9W AMD C-50 chip used in netbooks such as the Acer Aspire One 522.

The Z-01 is still an energy hog when compared with energy-sipping ARM-based chips which can run at 1W or less. But AMD’s new chip should be able to compete pretty well with Intel’s latest Atom processors for tablets, while offering high performance graphics. And unlike ARM chips, the AMD Z-01 can support Windows 7 if you happen to think that running Windows 7 on a budget tablet is a good idea.

AMD is also pointing out that you can run Windows and Android on tablets with x86 chips by using BlueStacks software which runs Android in a virtualized environment on top of Windows.

The first tablet announced with an AMD Z-Series processor is the latest version of the MSI WindPad 110W. Earlier versions of the tablet packed an AMD C-50 processor, but it looks like the manufacturer is using AMD’s latest chip to lower energy consumption even further.

Of course, while AMD is counting this as a design win, MSI is hedging its bets. The company also introduced the WindPad 120W this week. That tablet is powered by an Intel Atom Cedar Trail chip.