AMD has unveiled a low power, small form factor desktop computer that you can easily hold in one hand. If you get tired of holding the AMD LiveBox though, you can just plug it right into an outlet. There’s a two-prong power connector built right into the case, no cables required.

The AMD LiveBox is a prototype that could be a reference design for PC makers. AMD makes chips, not computers, but the LiveBox prototype shows what kind of mini-PCs could be built around AMD’s low power processors. 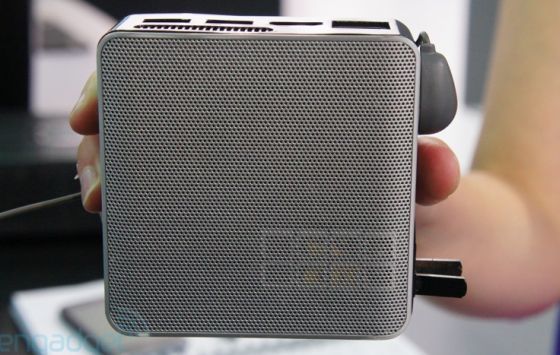 Engadget and Netbook News spotted the LiveBox on the show floor at Computex in Taiwan this week.

The LiveBox is powered by a 1 GHz AMD C-60 dual core processor with AMD Radeon HD 6200 graphics. The C-60 is basically on par with Intel’s Atom processors for netbooks. It’s an x86 chip that can handle Windows 7 and other operating systems, but it’s designed for low cost and low power consumption, not performance.

On the other hand, the Radeon HD graphics are good enough to handle 1080p HD video playback and some 3D graphics.