AMD has launched its second-generation A-series line of processors aimed at a wide range of computers from desktops to “ultrathin” notebooks. You can’t call them ultrabooks because Intel owns the rights to that word. 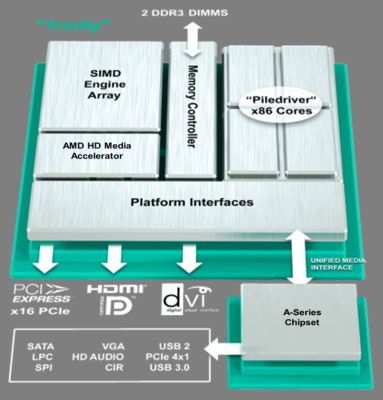 That represents a major power reduction from the first generation A-Series (Llano) chips which ran between 35W and 45W. AMD says you should be able to get up to 12 hours of battery life out of laptops with the new processors — but at the same time the company has improved overall performance.

AMD says the new chips offer up to a 29 percent overall boost in CPU performance and as much as a 56 percent jump in graphics performance thanks to the new AMD Radeon HD 7000 Series graphics.

Part of that comes from new Turbo Core technology which not only allows the CPU but also the graphics processor to run at higher clock speeds when necessary.

Of course, Trinity-based computers won’t just be competing against systems with older Llano chips. They’ll be going up against notebook and desktop computers with Intel’s Sandy Bridge and Ivy Bridge processors.

The folks at AnandTech took a sample AMD Trinity notebook for a spin and found that AMD continues it trend of pairing decent graphics cores with its mobile chips, with Trinity graphics representing a step up from Llano.

But Intel has also improved the graphics performance of its latest chips, and in terms of support for video games and other graphics tests, there’s not really that much difference between the best Ivy Bridge and Trinity chips.

General performance is a different story. 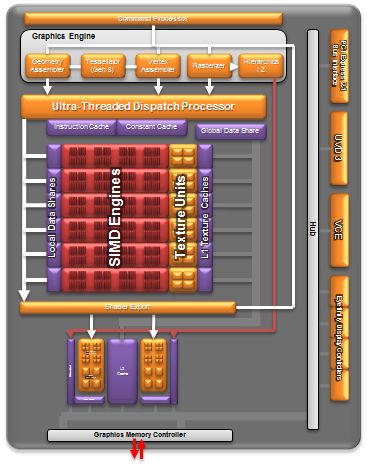 While Trinity definitely represents an overall step up from AMD’s Llano platform, AnandTech’s benchmarks show that computers with Intel Core i5 and Core i7 chips regularly trounced the best AMD had to offer in general performance tests. That said, the AMD chip actually comes out ahead of less powerful Intel Core i3 processors.

In other words, an ultrathin notebook with an AMD Trinity processor will likely be cheaper than an Intel-powered ultrabook with similar specs… and it may offer similar CPU performance to lower-end ultrabooks and significantly better graphics support.

These days graphics doesn’t just mean 3D gaming either. Apps ranging from video transcoders to web browsers can take advantage of hardware video acceleration, so even a laptop with a sluggish CPU can feel fast at times if it has a decent GPU. And Trinity’s not exactly sluggish.

The company is also working to match Intel’s efforts in the ultrabook space by building in support for features such as quick boot and resume-from-sleep speeds. AMD’s Start Now technology lets a computer resume from sleep in as little as two seconds or even perform a cold boot in as few as 10 seconds — assuming you’ve got a fast solid state disk, speedy RAM, and other ideal conditions.

To sum up, Trinity chips offer better CPU and graphics performance than their predecessors and are designed to offer long battery life and support for premium features such as super-fast boot speeds. They’re not quite as fast as Intel’s latest Ivy Bridge chips, but they’re expected to be significantly cheaper.

HP has already indicated that it could charge as much as $200 less for an AMD-powered “sleekbook” than it charges for a nearly identical Intel-powered ultrabook. Trinity-powered notebooks could having starting prices as low as $600.

AMD also recently updated its low-end Brazos processor line as well. Brazos 2.0 chips have clock speeds of up to 18W, but these budget processors aren’t nearly as powerful as Trinity chips and are clearly aimed at even cheaper notebooks such as the MSI L2700 which is available in Korea for about $440.

In the coming months we may see notebooks with Brazos 2.0 E-series processors which look nearly identical to systems with Trinity A-series chips. Make sure you know which you’re getting before opening your wallet. Neither is necessarily a bad choice, but you’ll get a lot more bang for your buck with an A-series chip.