It’s been a few years since AMD introduced its first Ryzen chips for embedded devices, and in that time the company’s laptop, desktop, and server processors have made big strides in performance while the embedded chips have… not.

Now AMD is updating its embedded chip family with the introduction of Ryzen Embedded V2000 processors. They’re still not exactly competitive with the company’s latest laptop and desktop chips, but AMD says the new chips offer up to 2X the performance per watt of their predecessors, largely due to a combination of an architecture update and a doubling of CPU core counts. 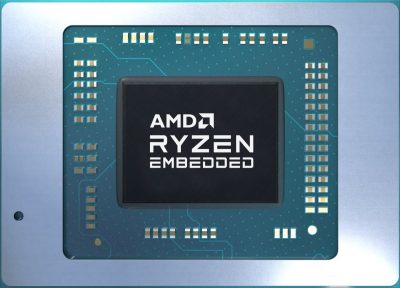 Of course, not all of the new chips are created equal. A launch AMD plans to make four new Ryzen V2000 series processors available and they’re all capable of driving up to four displays and they all support DDR4-3200 ECC RAM. But some consume as much as 54 watts and have base CPU frequencies as high as 3 GHz, while others are 10-25W chips that have base frequencies as low as 1.7 GHz.

If you’re keeping track, those specs are pretty close (but not identical) to the details that leaked a few months ago.

Embedded chips are typically used for specific applications such as ATMs, industrial or medical equipment, cars, casino gaming machines, or appliances, but they can also be used in general purpose computers. In fact, some of the devices currently available with Ryzen Embedded V1000 series processors include Intel NUC-like mini PCs from companies including ASRock, UDOO, and SimplyNUC.

While the pace of advancement for embedded chips may be slower, the support timeline is longer – AMD says it plans to offer its new Ryzen Embedded V2000 chips for at least 10 years.