Over the last few years AMD has been giving Intel a run for its money in the desktop processor space with its Ryzen line of processors that offer an awful lot of performance, typically at a lower cost than their Intel counterparts.

But AMD’s laptop processors haven’t been quite as impressive… and they haven’t been as popular with PC makers.

AMD is hoping to change that this year with the launch of the Ryzen 4000 line of mobile processors. They’re the first 7nm laptop processors from AMD, and the company is promising up to twice the performance per watt, 20-percent lower power consumption, and better graphics performance, among other things.

The first laptops with AMD Ryzen 4000-series processors are set to go on sale in the first quarter of 2020, and AMD says we can expect to see more than 100 systems powered by the new chips over the course of the year. 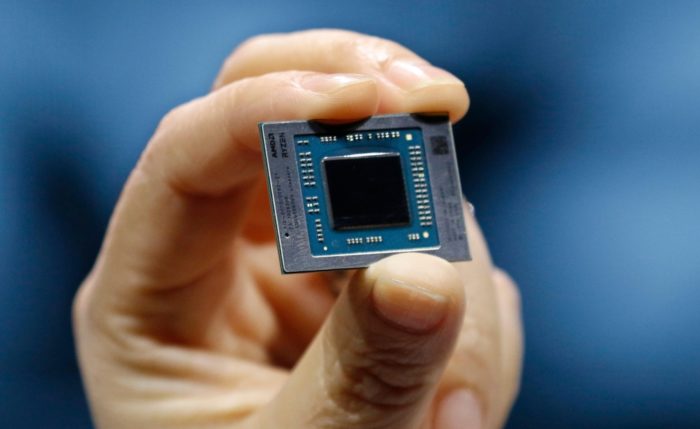 While Ryzen 4000 chips are AMD’s 3rd-generation of Ryzen mobile processors, they’re based on the company’s Zen 2 architecture, not the newer Zen 3 architecture used in desktop processors.

Still, the company says a Ryzen 7 4800U processor offers slightly better single-threaded performance than an Intel Core i7-1065G7 Ice Lake processors when running the Cinebench R20 benchmark. While the 4-percent advantage might seem negligible, there are two important things to keep in mind:

That Ryzen 7 4800U chip, for example? It has 8 cores and 16 threads. In the Cinenbench R20 multi-threaded performance test, it scores 90-percent higher than Intel’s best Ice Lake processor.

AMD says we can also expect better performance in video editing and gaming — the Ryzen 4000 series chips have Radeon Vega graphics, much like previous-gen Ryzen Mobile chips. It only has 8 Radeon cores (down from 11 in earlier chips), but AMD says it’s re-engineered its Vega mobile graphics to offer up to a 59-percent performance boost.

Of course, AMD gets to cherry-pick the benchmarks it’s showing off during its CES keynote. Real-world performance may differ… but it seems like the company has managed to give this year’s chips a serious performance bump while sticking with a 15 watt package.

AMD also has two new Athlon mobile chips for cheaper/lower-performance laptops (and the company seems to be borrowing Intel’s “gold” and “silver” designations to set them apart from one another):

The flagship processor will be the AMD Ryzen 7 4800H, an 8-core/16-thread processor that AMD says not only outperforms Intel’s 45 watt Core i7-9750H, but also the 95 watt Intel Core i7-9700K processor, at least in some tests (3DMark FireStirke Physics, according to AMD’s presentation slide). 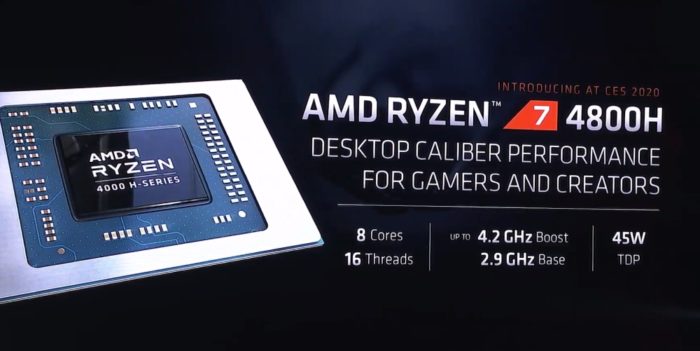 One of the first laptops with a Ryzen 7 4800H processors will be the Asus Zephyrus G14, a thin and light gaming laptop that’s coming in the first or second quarter of the year.

The notebook has a starting weight of just 3.5 pounds and measures just 0.7 inches thick. It will be available with either a WQHD display or a 120 Hz full HD display. 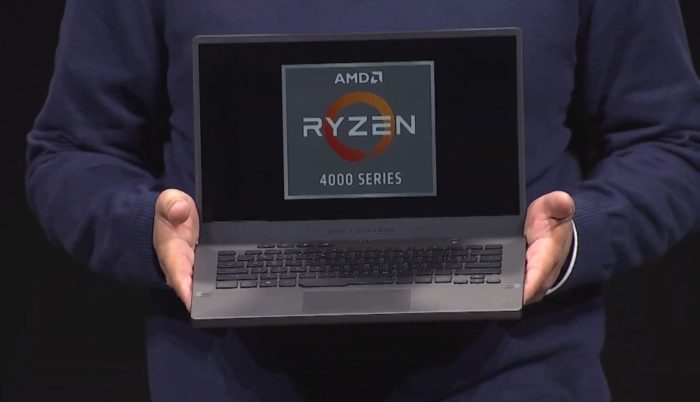