AMD is expanding its desktop processor lineup with a new set of low-cost, low-power processors. The new Athlon 200GE, Athlon 220GE, and Athlon 240GE are based on the same Zen architecture as AMD’s more powerful Ryzen CPUs. But these are budget chips with prices starting at $55 for an entry-level model.

The chips also have AMD Radeon Vega graphics baked in.

If that sounds like a lot of bang for the buck, you’re not wrong. But AMD did cut some corners in order to bring down the price. There’s a reason the company is slapping the Athlon label on these chips rather than the Ryzen name. 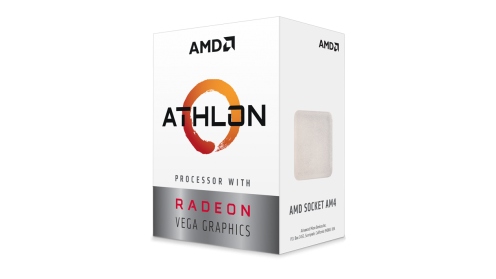 AMD hasn’t revealed detailed specs for the Athlon 220GE or 240GE. We should know more about those processors in the coming months. But the Athlon 200GE will be available starting September 18th and AMD has already provided some details about the new chip.

It’s a dual-core, 4-thread processor. It’s a 35W chip. It has a base frequency of 3.2 GHz. And it features Vega graphics with 3 compute units.

In other words, it sits somewhere below the Ryzen 3 2200GE processor that was unveiled earlier this year. That chip is also a 3.2 GHz Zen processor with Vega graphics and a 35W TDP. But it’s a quad-core processor (without hyperthreading) and it has 8 Vega compute units.

The company says it brings “up to 169 percent more responsive computing” than an AMD A6-9500E processor.

AMD also offers a few comparison points with Intel’s Pentium G4560 Kaby Lake processor: the Athlon 200GE offers up to 67 percent better graphics performance, up to 84 percent faster HD gaming, and up to 100 percent better power efficiency. It’s probably best to take those comparisons with a grain of salt, since AMD could cherry pick the benchmarks that makes its chip look best. But the integrated Vega graphics alone should make the Athlon chip pretty competitive with Intel’s similarly-priced Pentium processor.