Chip maker AMD is launching its first processors based on ARM technology this year. The first ARM chips from the company are aimed at servers rather than desktops, notebooks, or tablets. But software and hardware developers can now apply for a development kit which is basically a microATX PC motherboard with a quad-core AMD Opteron A1100-Series processor and 16GB of memory. 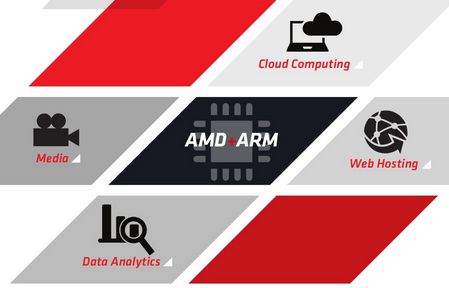 The Opteron A1100 Series processor is an ARM Cortex-A57 chip based on ARMv8 architecture. It’s a 64-bit processor with up to 4 MB of shared L2 cache and 8MB of shared L3 cache, support for up to 4 memory modules, 8 Serial ATA 3 ports, 8 lanes of PCI Express, and 2 10 Gigabit Ethernet ports.

AMD also plans to offer an octa-core version of the Opteron A1100 Series processor.

The Opteron A1100 development kit isn’t aimed at consumers… and it doesn’t come cheap. It sells for $2,999 and it’s designed to help developers get ready for the launch of AMD’s ARM-based server chips in 2015.

If all goes according to plan, you’ll probably never notice if websites you visit are using servers based on ARM or x86 technology. But ARM servers could reduce power consumption which could save a lot of money and carbon emissions.

If AMD makes a splash with its server chips, we may also see the company launch ARM-based chips for consumer devices in the future.