Laptops with AMD’s new Brazos 2.0 processors are already starting to hit the market, but the chip maker hasn’t said much about the platform… until today.

AMD expects the next-generation E-Series processors to power notebooks to show up in laptops that sell for well under $600. 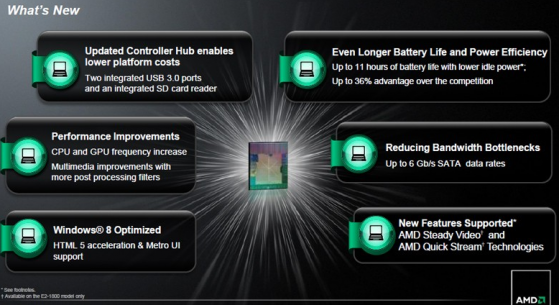 The new chips will fill the same niche as last year’s AMD E-300, E-350, and E-450 processors. Both of the new chips feature support for DirectX 11 graphics, optimizations for Windows 8, and lower power consumption during idle, allowing for up to 11 hours of battery life (assuming you have a reasonably high capacity battery).

As relatively low power processors, we’ll likely see the new chips in affordable portable computers soon. But last year’s E-Series chips also had a habit of showing up in low cost laptops with 14 and 15 inch screens. I wouldn’t be surporised to see Brazos 2.0 chips in larger laptops as well.