AMD is launching a new line of chips aimed at mobile devices including notebooks, tablets, and other devices and the company says that we should start to see devices with the new chips in time for the 2014 back-to-school season.

The new chips, code-named “Beema” and “Mullins” are designed to offer up to twice the processing performance-per-watt as the Intel chips they’re competing against — but take that with a grain of salt. AMD is comparing even its 15W Beema chip against Intel’s 7.5W Pentium Bay Trail processors.

That said, AMD has a reputation for offering decent graphics performance, and the company has been working over the past few years to make its mobile chips both more powerful and more efficient. Beema and Mullins go further in that direction than any AMD chips to date. 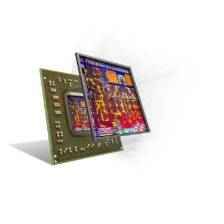 AMD’s new Beema chips are aimed at notebooks and other mobile devices. The company will offer 10W dual-core models like the 1.35 GHz AMD E1-6010 with 350 MHz Radeon R2 graphics and 15W quad-core chips including:

According to AMD, the new chips should also offer significantly better graphics performance than Intel Pentium Bay Trail M or Haswell U chips, but it’s noteworthy that the company’s press release doesn’t say much about Intel’s Core i3 or faster chips.

The low-power Mullins chips are designed for tablets, notebooks, 2-in-1 systems, and other devices where you might find an Intel Atom processor. AMD says its chips offer up to 3 times the performance of an Atom chip, but that will probably depend on which Atom chip you’re looking at… there are quite a few. The new chips are also said to offer twice the performance-per-watt of AMD “Temash” chips, which is a welcome improvement from last year’s somewhat disappointing low-power processors.

Some of the first Mullins chips will include:

According to AMD, while Lenovo and Samsung are among the first to introduce products based on its new chips, “many more” are expected to launch by this fall.

Want a better sense of what to expect from the new AMD chips? Check out the detailed write-up at AnandTech.