AMD’z new Z-60 processor is a low-power chip designed for Windows tablets. It’s a 1 GHz dual core processor with a TDP of 4.5 watts, which will let tablet makers build systems that are just 10mm (0.4 inches) thick while using fanless designs.

In other words, the Z-60 chip is sort of AMD’s answer to Intel’s Z2760 Clover Trail processor. But AMD’s chip includes a Radeon HD 6250 graphics core which should offer better support for 3D graphics and HD video acceleration than Intel’s chip.

The AMD Z-60 is code-named “Hondo,” and the company is positioning the chip as a low-cost alternative to other x86 processors.  Much the way that laptops with AMD C  and E series chips tend to carry lower price tags than similar models with more powerful processors, AMD expects tablets with Z-60 chips to offer a balance between price and performance, with an emphasis on price.

Unfortunately AMD isn’t providing any specific details about pricing. It will be up to device makers to tell us how much their tablets will actually cost — and while AMD expects some of the first Z-60 powered tablets to hit the market this year, the company doesn’t have a lot of design wins under its belt at the moment.

At this point it isn’t clear whether Hondo tablets will cost more or less than similar models with Intel Clover Trail processors or ARM-based chips. 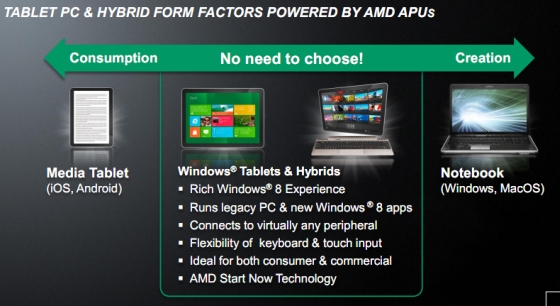 As an x86 processor, the AMD Z-60 will work in computers running Windows 7 or Windows 8, unlike ARM-based chips such as the NVIDIA Tegra 3 or Qualcomm Snapdragon S4.

That means that you’ll be able to run full-blown desktop applications on a Hondo tablet, much the way you can on a Windows 8 tablet with an Intel Clover Trail CPU. That includes the full desktop version of Microsoft Office as well as programs designed for Windows and earlier. ARM-based tablets, on the other hand, will be limited to the Windows RT operating system and apps that are optimized for ARM. 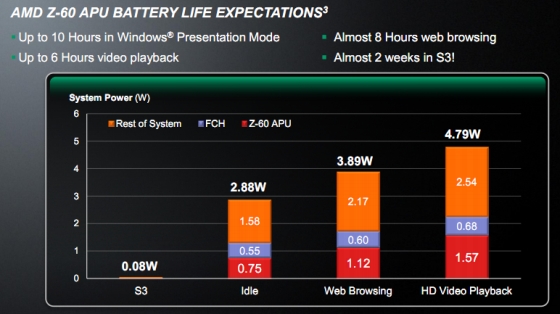 AMD says that you should be able to get up to 10 hours of battery life with a Hondo tablet when using it for basic tasks, up to 8 hours of web browsing time, or 6 hours of video playback.

In S3 sleep mode, it’d take 2 weeks to run down the battery.

The CPU itself should offer about the same performance we’ve come to expect from the AMD C-60 processor for netbooks and low-power laptops.

In other words, it’s not exactly a speed demon, but it should be fast enough for basic tasks including editing documents or surfing the web.

But AMD has also tweaked the chip to work with Windows 8 to speed up some operations  For instance, a Z-60 system should be able to boot in as little as 25 seconds, resume from sleep in just 2, and connect to the internet in about 1.5 seconds. 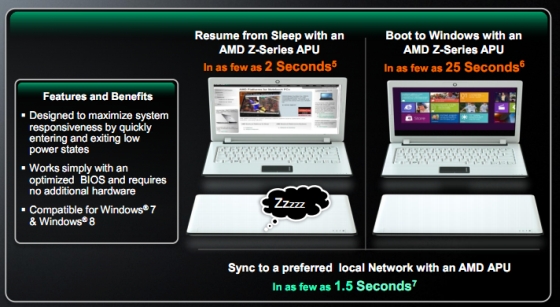 What really makes the Z-60 stand out though, is its Radeon HD graphics. AMD says the chip has 80 Radeon cores for HD video and hardware-accelerated graphics. It also supports DirectX 11. Clover Trail is stuck at DirectX 9.

The processor supports screen resolutions up to 1920 x 1200 pixels.

While AMD’s integrated Radeon graphics tend to be much more powerful than the PowerVR graphics you get with the latest Intel Atom processors, not all software takes advantage of the hardware.

For instance, the Netflix website uses Microsof Silverlight to stream video — and anyone that’s used a notebook withRadeon HD 6200 or Radeon HD 6300 series graphics in the past knows that Netflix HD video looks choppy on a computer with those graphics cards. That’s because Netflix and Silverlight don’t take advantage of hardware video acceleration.

But that shouldn’t be as much of a problem if you pick up a Windows 8 tablet with a Hondo chip. Netflix is working on a new Netflix app for Windows 8. Like the company’s apps for Android and iOS, the Netflix app for Windows 8 doesn’t rely on Silverlight, and it does take advantage of hardware video acceleration capabilities of AMD’s Radeon chips, which means that you should be able to stream Netflix HD video smoothly on a system with a Z-60 chip.

You just won’t be able to do it from the web browser.

The AMD Hondo chip is a 1 GHz dual core processor. There’s no Turbo Boost feature, so that 1 GHz ceiling is really the top speed.

AMD’s Hondo chip has 1MB of L2 cache and supports up to 8GB of RAM. I/O capabilities include support for up to two USB 3.0 ports as well as HDMI output. 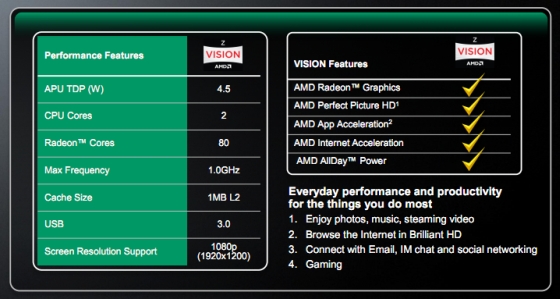 The AMD Z-60 uses twin Bobcat cores similar to those found in the company’s C, E, G, and Z series chips the company has released to date. But at 4.5W, the Hondo processor uses 20 percent less power than its closest sibling, the AMD Z-01.

There’s good news and bad news for anyone interested in running Ubuntu, Android, or another non-Windows operating system on a tablet with an AMD Z-60 chip.

The bad news is that AMD isn’t offering any official support for open source software on this chipset. AMD won’t be releasing drivers or source code to help developers port their operating systems to run on Z-60 chips.

If that sounds familiar, that’s pretty much the same approach Intel is taking with its Clover Trail processors.

On the other hand, the Clover Trail chips are hampered by their PowerVR graphics cores which have been causing headaches for open source developers for ages.

There’s historically been better open source support for Radeon graphics, and while AMD has no plans to release Linux or Android drivers specifically for this chip, that could change in the future if there’s enough demand. Company officials say AMD is generally committed to supporting open source development.

AMD’s tablet chip offers higher performance graphics than you’ll get from an Intel Clover Trail chip or an NVIDIA Tegra 3 ARM-based chip. The folks from AnandTech shot a recent video pitting a Hondo system against a tablet with a Tegra 3 processor to show off its graphic prowess, and the Hondo system came out way ahead.

But some of that performance will come at the cost of power consumption. While the Z-60 is one of the lowest power CPUs AMD will offer for Windows computers, as my colleague James Diaz pointed out to me, it’s still a bit of an energy hog when compared with the competition.

While the CPU and graphics are on a single chip, AMD also uses a Fusion Controller Hub (or FCH) to handle USB and other input/output functions. So that makes the 4.5W chip more of a 5+ watt chip when you include the power consumed by the FCH.

That should still be enough to provide up to 8 hours of battery life, but that falls short of the 10+ hours offered by some tablets with ARM or Clover Trail chips.