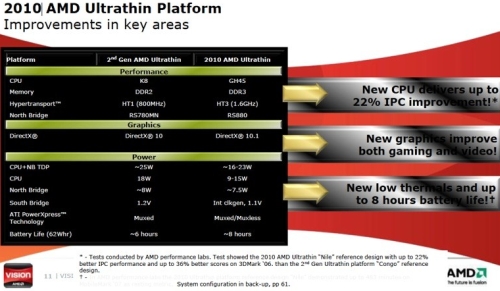 Intel’s pretty much had the netbook and thin and light laptop space to itself for the last few years. Sure, VIA and ARM have tried to make a dent, but neither has really had much success. And for the most part, AMD has been sitting back and watching. The company’s early forays into the low power, thin and light space were perhaps a little too low power, with the AMD Neo MV-40 chip offering performance that’s barely any better than an Intel Atom chip while consuming much more power.

But now AMD is hoping to shake things up with its new Nile platform for ultrathin notebooks. The new processors will come in single and dual core varieties while consuming between 9 and 15 watts of power.When you add the NorthBridge controller, power consumption is somewhere between 16 and 23 watts.

PC makers will be able to pair the chips with ATI Radeon HD 5400 or 4200 graphics, which should give these notebooks at least enough power to take on Intel’s CULV platform. You’ll also have support for DirectX 10.1 graphics and DDR3 memory. And AMD is promising around 8 hours of battery life — although that will clearly depend on the batteries that PC makers offer for laptops with these chips.

AMD expects the Nile chips to show up in notebooks with 11 to 13.3″ displays, HDMI output, and 5.1 channel audio.

You can find a run down of the new chips after the break. Oh, and if some of these chip sound familiar, it’s because they’re the same ones found in the new Acer Aspire 521, 721, and 1551 laptops we saw last night.