AMD still doesn’t plan to compete directly with Intel, VIA, or ARM in the netbook space. But earlier this year the chip maker introduced the relatively low power AMD Athlon Neo CPU for ultrathin laptops like the HP Pavilion dv2. It’s paired with an ATI graphics card and can handle HD video on laptop with a 12 inch display that’s not much bigger than some netbooks. 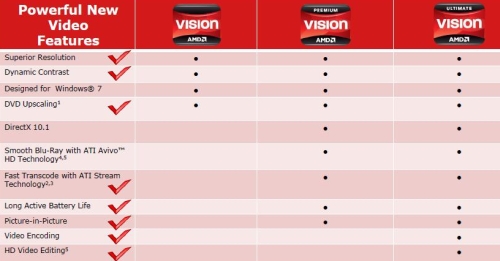 Today AMD is launching its next generation processor for ultrathin laptops. Actually, the company has a whole slew of announcements today, but I’m most interested in the new ultrathin platform which includes a 1.6GHz AMD Athlon Neo X2 dual core processor L335.

AMD’s Patrick Moorhead tested a system with this CPU, ATI Radeon HD 3200 graphics, and a 12 inch, 1366 x 768 pixel display and HDMI output. The laptop was made by MSI and wasn’t much bigger than an MSI Wind U100 notebook. Moorhead says the computer had no problem with HD YouTube and Hulu videos as well as HD video from a webcam and a Blu-Ray drive. The system could also handle modern video games.

AMD is also promising that the next generation chips will provide better battery life. The HP Pavilion dv2 topped out at around 2.5 hours. But there aren’t a lot of specifics about the battery performance yet.

In related news, AMD is trying to simplify the labels it slaps on computers with its chips. Apparently there are 221 different AMD stickers right now. I could have sworn I’d only seen 211. But anyway, soon there will be just three stickers for most computers: AMD Vision, AMD Vision Premium, and AMD Vision Ultimate. The basic Vision sticker will go on systems that can handle basic computing tasks but which aren’t really optimized for HD video. Premium systems will have support for DirectX 10.1, Blu-Ray video, and longer battery life. Ultimate labels will go on systems with extra support for HD video editing and encoding.