AMD isn’t expected to bring its new low power processors aimed at tablets to market until 2013. But according to Hexus, AMD will show off the first chips with its new low power “Jaguar” cores at the Hot Chips Symposium on August 28th. 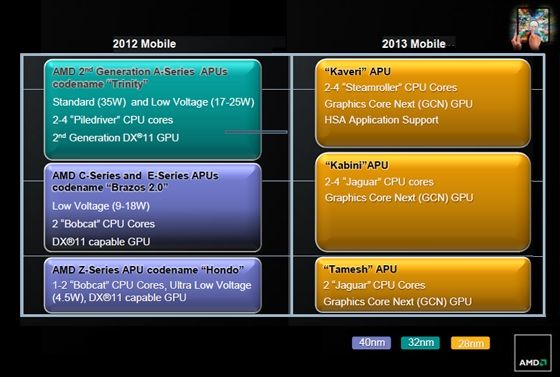 There will be two new chips, both using 28nm Jaguar cores. Tamesh is a dual core processor which has a TDP of 3W and which will replace the AMZ Z-Series processor line.

AMD’s Kabini chip will offer a little more performance and will be available with between 2 and 4 Jaguar cores.

Both Kabini and Tamesh chips will go up against Intel’s latest low power Atom processors, but AMD tends to have an edge in the graphics department. It’s likely that both chips will offer better support for HD and 3D graphics than Intel Atom processors.