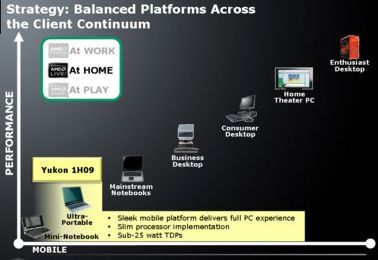 AMD has sort of stayed out of the netbook space for the last year or so, shaking its head and frequently wondering why people would want computers that can’t play Crysis. Then in January, AMD unveiled a product roadmap that included cheaper, lower power chips that could be used in low cost portable computers like the HP Pavilion dv2 line. These processors provide better performance than an Intel Atom chip, but also consume more battery life.

But further down the road is a CPU that AMD is currently calling Ontario… which AMD CEO Dirk Meyer tells CNet could end up powering mini-laptops with 10 inch screens and $399 price tags. Does this mean that AMD has finally seen the light and is willing to admit that people actually like and want netbooks? Sort of.

Meyer doesn’t think much of the name netbook, and thinks that eventually people will just start to think of the devices as laptops… with smaller screens. Which makes sense, because that’s exactly what they are. But it’s good to see that AMD is coming around to the idea that it needs to produce low power, low cost chips for the bottom end of the market, because competition in this space is always good. Right now Intel and VIA pretty much dominate the netbook market, although ARM is preparing to give them a run for the money. AMD’s entry into the mini-laptop space could shake things up quite a bit more.