AMD AppZone is available as a free download, but it will only work on computers featuring the latest AMD graphics chips. 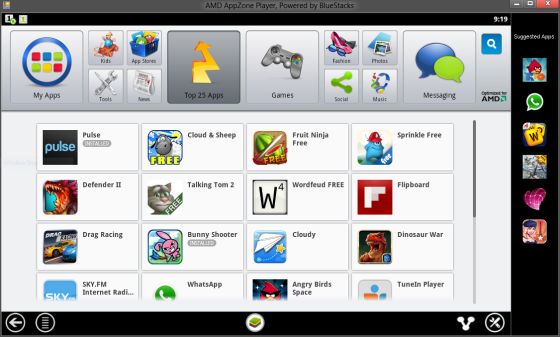 I tried installing the AppZone software on a Dell Zino HD with AMD Radeon HD 4200 graphics, and received an error message suggesting that the graphics core is either unsupported or my drivers are out of date (which they’re not).

Of course, BlueStacks offers similar software for pretty much any Windows or Mac computer with Intel or AMD processors. But the reason the AMD AppZone checks your graphics card is because this build has been optimized to take advantage of modern AMD Radeon graphics to offer better performance of Android apps on large, high resolution displays.

Whether you’re using BlueStacks or AMD AppZone, you can not only find, install, and run Android apps on a PC — you an also use the BlueStacks Cloud Connect  app synchronization tool on your phone or tablet to send apps you’ve already installed on a mobile device to your PC.

Most Android apps are designed for use with a touchscreen rather than a keyboard and mouse, but many games, utilities and other apps work reasonably well in a laptop or desktop environment — especially apps that are designed for tablets and other devices with large screens. Some tablet apps may not be available though, since BlueStacks basically provides an Android 2.3 emulation layer. That version of Android was designed for phones, not tablets.

But I think BlueStacks and AMD AppZone would be even more useful on a Windows 7 or Windows 8 tablet, since there are hundreds of thousands of touch-friendly apps available for Android, and just a few thousand Windows 8 apps in the Windows Store so far.