The AMD 4700S 8-Core Processor Desktop Kit is a compact desktop computer motherboard paired with a previously unannounced processor called the AMD 4700S. It’s a processor with 8-core, 16-thread processor with CPU cores based on AMD’s Zen 2 architecture and no integrated graphics.

Signs point to the chip being a version of the custom processor AMD designed for the Xbox Series X. So if you’ve ever wanted to use that processor in a desktop computer, maybe you’ll be able to do that now… although AMD hasn’t announced pricing or availability details. Update: The chip maker tells Tom’s Hardware that PC makers will begin introducing systems based on the AMD 4700S kit on June 24, 2021. 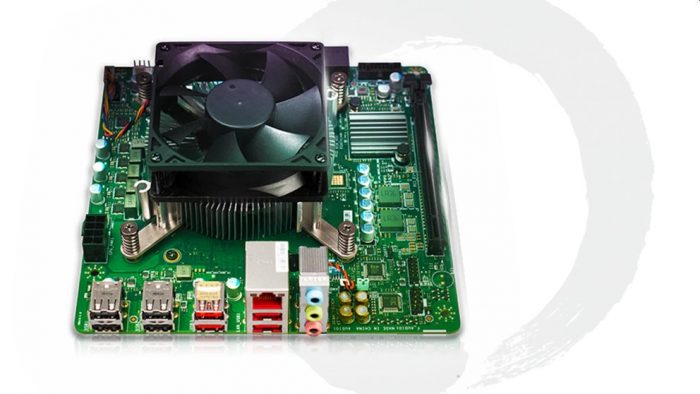 The first time we heard about the AMD 4700S was when a small form-factor desktop computer powered by the processor went on sale in China earlier this year. That’s when internet sleuths noticed the similarity between the processor and the chip used in Microsoft’s latest game console.

According to AMD, its new Desktop Kit pairs the processor with a motherboard featuring a single PCIe x16 slot that can handle up to Radeon RX 590 or NVIDIA GeForce GTX 1060 graphics. In other words, don’t expect features like hardware-accelerated, real-time ray tracing. If you’re looking to build a modern gaming PCs, this might not be the kit to choose.

You’ll definitely need a graphics card if you plan to use the board as the foundation of a desktop computer though – it doesn’t have its own built-in DisplayPort, HDMI, or even VGA port so you’ll likely need to rely on a GPU card for vide output.

According to the statement issued to Tom’s Hardware, AMD expects “to see over 80 designs come to market from our SI [System Integrator] partners.” Some models are already available in Asia, where they tend to sell for around $320 – $700, but it’s unclear with if or when we’ll see models hit the Western Hemisphere.

via Hexus and TechPowerUp