Amazon has accidentally revealed plans to launch a new Kindle Papeewhite eReader on September 30th. A listing for the new eReader went live on the Amazon website briefly this morning, before it was removed.

Update: Since the cat’s already out of the bag, Amazon has apparently decided to just go ahead and start taking pre-orders. You can order the new Kindle Paperwhite for $119 and up

, but it won’t ship until the end of September.

The news isn’t a big surprise — Amazon recently stopped selling the original Kindle Paperwhite in the United States, and the company has a habit of launching new models every fall.

But now we have a bit of an idea of what to expect from the next-gen Kindle Paperwhite. 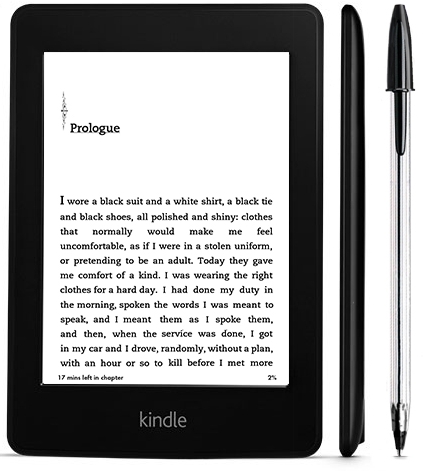 As you’d expect from the name, the new Kindle Paperwhite is an eReader with black text on a largely white background. It’ll also be illuminated, like the original. But there will also be a few new features:

Many of the other updates appear to be software-related, which means we may see some features made available for earlier Kindle models as well.

For instance, there’s support for in-line footnotes, and a “Kindle Page Flip” feature for scanning books by page, chapter, or by skipping to the end without losing your current place.

Amazon also lists a few features that are coming soon, including integration with GoodReads, the online book community that Amazon recently acquired which lets you connect with friends, see what they’re reading, and read millions of reviews. Kindle FreeTime is also coming to the Kindle Paperwhite, rewarding kids with achievements for reading, among other things.

It looks like Amazon plans to offer the new Kindle Paperwhite for $119 and up, just like the current model.