The Amazon Fire TV Stick is a $39 device that you can plug into the HDMI port of your TV to stream internet video or play games. It’s a simple device that offers much of the functionality of the original Amazon Fire TV for less than half the price.

But the Fire TV Stick is also a lot slower than the Fire TV box which means it can’t play some games and lacks support for some features such as listening to audio using Bluetooth headphones.

Now it looks like Amazon may have a more powerful Fire TV Stick in the works… although it’s not clear yet how much it’ll cost or just how much more powerful it will really be. 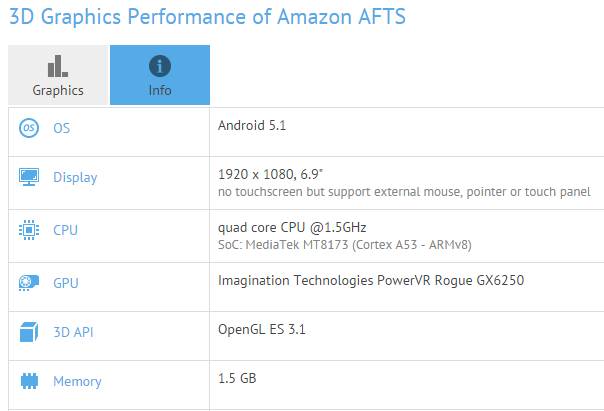 Amazon hasn’t officially introduced the 2nd-gen Fire TV Stick yet, but a device called the Amazon AFTS just showed up in the database of graphics benchmarking tool GFXBench. AFTS could stand for Amazon Fire TV Stick.

While it’s possible the specs listed at GFXBench are wrong, or that this isn’t actually a Fire TV Stick, there are a few clues that suggest it really could be Amazon’s next media streaming device.

First up, it features WiFi and Bluetooth, but no GPS, compass, accelerometer, light sensor, camera, or SIM card. You’d expect most phones, tablets or other Android devices to have at least a few of those things.

Second, the AFTS features a MediaTek processor. While Amazon’s original Fire TV uses a Qualcomm Snapdragon 600 chip and the first-gen Fire TV Stick has a Broadcom BCM28155 processor, Amazon does use MediaTek processors for some of its most recent devices: the 4th-gen Fire HD 6 and Fire HD 7 tablets each have MTK8135 quad-core processors.

OK, so if the GFXBench listing is accurate, what can we expect from the next Fire TV Stick?

That means the new model would have a higher-performance processor and more memory than the current version (which has 1GB of RAM and a dual-core, ARM Cortex-A9 processor).

It could bring Fire TV-level performance to the Fire TV Stick… although I’ll be curious to know if Amazon also plans to update the wireless hardware to add support for Bluetooth 4.0. The original Fire TV Stick only supports Bluetooth 3.0.

There are some other specs listed which probably don’t mean much. GFXBench says the AFTS has a 6.9 inch, 1920 x 1080 pixel non-touch display. But it’s likely that’s just a screen the Fire TV Stick was attached to when the benchmark was running (the reason GFXBench often posts specs for products before they’re released to the public is because people working at the company might run the test on pre-production hardware).