Amazon’s Echo and related products use the spoken word as a user interface. You interact with Alexa on the Echo, Tap, Dot, or Fire TV by talking, and it speaks back to you.

While you can use your voice to control music playback, get answers to questions, request news or weather updates or order products, there’s potential for a whole bunch of other things… including games.

There are already a handful of games available for Alexa. But Amazon wants to help developers create more. 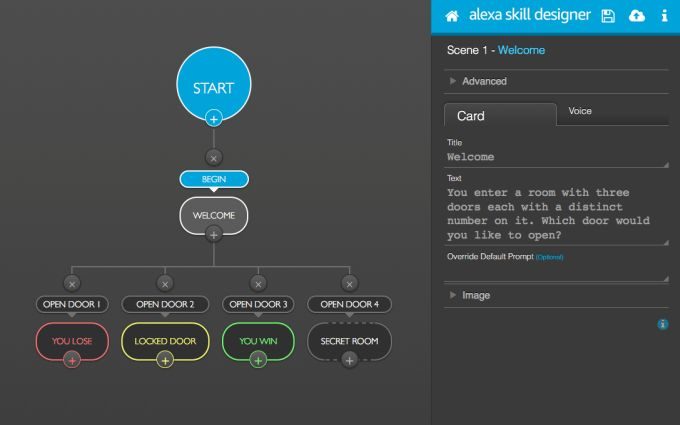 So the company has released a new open source tool that developers can use to create adventure-style games.

Basically Alexa will tell a story and ask you for input before describing the next part of the tale. You might not be able to get out of a room, discover the murderer, find the hidden treasure, or defeat the villain unless you make the right choices.

The new adventure game tool features a visual editor that makes it relatively easy for even folks with limited developer experience to create a game that’s playable on an Amazon Echo.

The new tool seems a bit like RPG Maker: it won’t necessarily let you build the most unique game around, since you’ll be using the same basic building blocks as other game developers. But if you have an original story it doesn’t matter if the style of the game seems familiar.