Amazon’s 3rd-gen Echo Show smart display is called the Amazon Echo Show 5… which sort of makes sense because the name refers to the screen size rather than the generation.

Rather than replacing the 2nd-gen Echo Show, the new model will be sold alongside it as a smaller, less expensive option.

The Echo Show 5 goes up for pre-order today for $90 and should begin shipping in June. 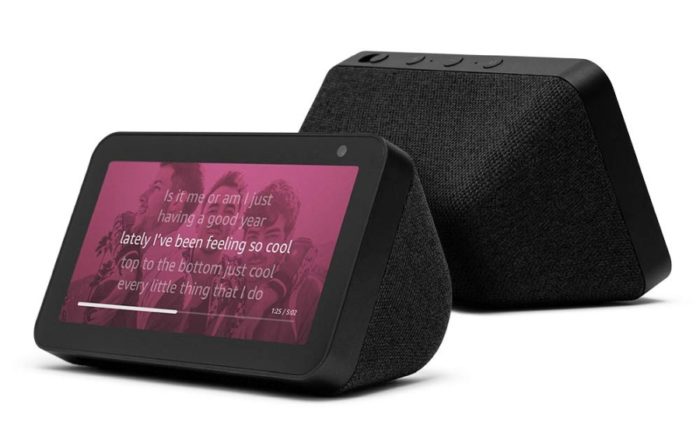 The littlest Echo Show has a 5.5 inch, 960 x 480 pixel touchscreen display, a single 4 watt speaker, a 1MP camera with a privacy shutter, and a microphone with an on/off button. Under the hood it features a MediaTek MT8163 processor.

For the sake of comparison, the larger Echo Show has a 10.1 inch, 1280 x 800 pixel display, stereo 10 watt speakers, and a 5MP camera (without a privacy shutter). It’s powered by an Intel Atom x5-Z8350 Cherry Trail processors, and the larger Echo Show also has Zigbee support and works as a smart home hub, which is something the new Echo Show 5 lacks.

So the new model isn’t so much a replacement as a new entry-level alternative and/or a cheaper option for adding a second or third device to your household if that’s something you’re looking to do.

The new Echo Show 5 supports 802.11a/b/g/n/ac WiFi and Bluetooth, has a 3.5mm audio jack that you can use to plug in external speakers.